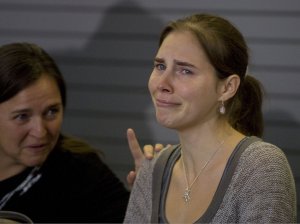 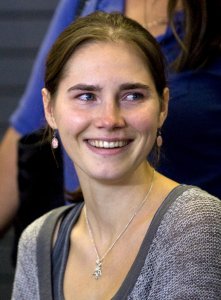 World News // 2 years ago
Amanda Knox, exonerated of murder, returns to Italy
Amanda Knox, a U.S. citizen, has returned to Italy for the first time since she was released from prison in 2011 and acquitted of murder to tell her story.

Top News // 4 years ago
On This Day: O.J. Simpson acquitted of murder charges
On Oct. 3, 1995, O.J. Simpson was acquitted of charges that he killed his former wife, Nicole Brown Simpson, and her friend, Ron Goldman.

World News // 7 years ago
Amanda Knox faces Italian court decision
An Italian court is set to decide on whether to overturn or uphold the conviction of American Amanda Knox for the murder of Briton Meredith Kercher.

There is only one road I have chosen to get out of here, and that is the appeal my lawyers are preparing

It really appears [the judge] wants to get to the truth. And the truth is really going to set her free

When I went to prison at the age of 20, I was starting to weave together the threads of my life and it's as if someone suddenly stripped away all these threads

We've been asking all along that independent people take a look at the DNA, and now that's been granted

The murder of Meredith Kercher occurred in Perugia, Italy, on 1 November 2007. Kercher, aged 21 at the time of her death, was a British university exchange student from Coulsdon, South London. She shared an upstairs flat with three other young women. She was sexually assaulted and stabbed, and property belonging to her was stolen.

Rudy Guede, a resident of Perugia, was convicted on 28 October 2008 of the sexual assault and murder of Kercher. His fast-track conviction was upheld, and he is now serving a reduced sentence of 16 years. Raffaele Sollecito, an Italian student, and Amanda Knox, an American student and a flatmate of Kercher, were convicted of sexual assault and murder in a separate trial on 4 December 2009. They were given sentences of 25 and 26 years respectively. Knox and Sollecito have appealed. Their appeal commenced in December 2010 and is scheduled to end in late 2011.

The trials have been the subject of news reports around the world, particularly in Italy, Britain and the United States. The coverage has been criticised for being tabloid in nature rather than presenting the evidence accurately and dispassionately.

FULL ARTICLE AT WIKIPEDIA.ORG
This article is licensed under the GNU Free Documentation License.
It uses material from the Wikipedia article "Amanda Knox."