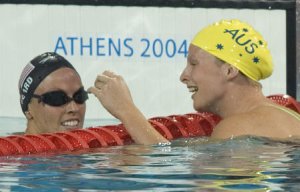 Beard made her first Olympic appearance at the 1996 Atlanta Olympic Games at the age of 14, while still a student at Irvine High School in Irvine, California. Her youth and shy manner captured the attention of the media, and she was often photographed clutching her teddy bear, even on the medal stand.

FULL ARTICLE AT WIKIPEDIA.ORG
This article is licensed under the GNU Free Documentation License.
It uses material from the Wikipedia article "Amanda Beard."
Back to Article
/