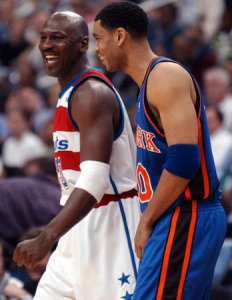 While my body and my knees feel fine, I know what's required for me to be truly effective in the NBA again, and it involves a timing and progression that would not be fair to (Coach Isiah Thomas) and the Knicks right now

After my wife and I were blessed with the birth of our fourth child last week, I realized that New York is where I am supposed to be, and the Knick uniform is the one I want to wear

Allan Wade Houston (born April 20, 1971) is a retired American professional basketball player for the NBA, and currently the Assistant to the President for Basketball Operations, for the New York Knicks. Currently Houston spends his time helping a plethora of different charity and non-profit organizations.

Houston was born in Louisville, Kentucky and played at Ballard High School in Louisville, helping them to win the 1988 Kentucky state championship. He went on to play at the University of Tennessee (where he played under his coach and father Wade) and graduated in 1993 as the school's all-time leading scorer, and he is currently second to Chris Lofton at Tennessee for three point field goals made. He was roommates with UT baseball standout Brody Hendrix. Houston is a member of Kappa Alpha Psi Fraternity, Inc.

FULL ARTICLE AT WIKIPEDIA.ORG
This article is licensed under the GNU Free Documentation License.
It uses material from the Wikipedia article "Allan Houston."