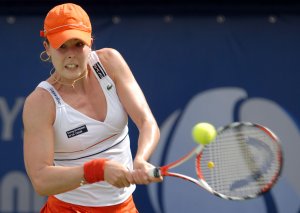 Sports News // 3 weeks ago
U.S. Open tennis: Osaka advances to quarterfinals, Kvitova among top upsets
Naomi Osaka advanced to the 2020 U.S. Open women's singles quarterfinals with a straight-sets win while Petra Kvitova and David Goffin were among the players to suffer round-of-16 upsets at the Grand Slam in Queens, N.Y.

Tennis // 2 years ago
Hometown hero Maria Sharapova ousted in 2017 Kremlin Cup opener
Maria Sharapova's bid for a second title in as many weeks ended abruptly on Tuesday with a loss to eighth-seeded Magdalena Rybarikova in the opening round of the Kremlin Cup in Moscow.

Tennis // 3 years ago
2017 U.S. Open: Garbine Muguruza breezes to opening-round win
A pair of Wimbledon champions turned in impressive performances on the opening day of the U.S. Open.

Alizé Cornet (born 22 January 1990) is a French professional tennis player and the current French number three (Behind Marion Bartoli and Aravane Rezaï). She was born in Nice, Alpes-Maritimes, and has a career-high ranking of No. 11, achieved on 16 February 2009; as of 20 June 2011 she is ranked World No. 69. Cornet also has an extensive juniors record, winning the 2007 Girls' Singles at Roland Garros. She has won 1 WTA title.

Cornet reached 2nd round at Australian Open where she lost to ninth seed Daniela Hantuchová. Over the following months, Cornet experienced a great level of success on the main tour, particularly on clay, reaching the final in Acapulco and the semi-finals in Amelia Island and Charleston (a Tier I event). Cornet entered the 2008 Rome Masters and beat Vera Dushevina 6–1, 6–3 in the first round, Francesca Schiavone 6–3, 6–2 in the second, world number 3 Svetlana Kuznetsova 6–2, 6–4 in the third, and then received a walkover from an injured Serena Williams to get into the semi-finals. Here she defeated Anna Chakvetadze 3–6, 6–4, 6–3, to reach her first Tier I final. However here she lost to Jelena Janković 6–2, 6–2.

FULL ARTICLE AT WIKIPEDIA.ORG
This article is licensed under the GNU Free Documentation License.
It uses material from the Wikipedia article "Alize Cornet."
Back to Article
/