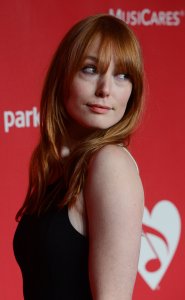 TV // 2 years ago
Alicia Witt: A 'massive overlap' of Hallmark and horror fans
"The Walking Dead" and "The Exorcist" alum Alicia Witt said many horror fans tell her they also enjoy her Hallmark Channel holiday movies.

Top News // 5 years ago
The Almanac
On Aug. 21, 1959, an executive order, signed by President Dwight Eisenhower, admitted Hawaii to the Union, making it the 50th state of the United States.

Chris and I were sitting in the car, shooting a scene in the middle of Manhattan traffic, and everyone was honking and getting impatient when we had to reshoot the scene

Witt was born in Worcester, Massachusetts. Her mother, Diane (née Pietro), is a junior high school reading teacher, and her father, Robert Witt, is a science teacher and photographer. She has a brother, Ian. Witt was discovered by David Lynch when she appeared on the television show That's Incredible! in 1980; she had recited Shakespeare's Romeo and Juliet. He cast her in the movie Dune (1984), where she played Paul Atreides' young sister Alia. She turned eight during filming. Afterwards, she left Hollywood to concentrate on her studies and music. She was home schooled by her parents. She won several national and international classical piano competitions, including the "Bartok-Kabalevsky International Piano Competition".

At age 14, Witt earned her high school diploma. Shortly thereafter, she moved to Hollywood with her mother to pursue a career as a full-time actress. In September 1990, she competed on Wheel of Fortune. Soon, Lynch, to whom she refers as a mentor, created the role of Gersten Hayward especially for her in his successful series Twin Peaks. He cast her again in Blackout, a segment in his short-lived HBO series Hotel Room.

FULL ARTICLE AT WIKIPEDIA.ORG
This article is licensed under the GNU Free Documentation License.
It uses material from the Wikipedia article "Alicia Witt."