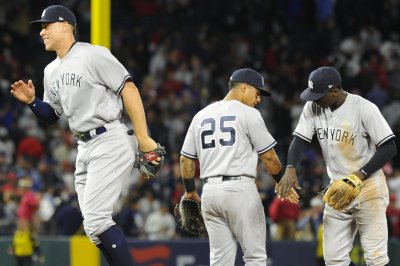 MLB // 3 years ago
Torres built to last as Yankees host Rays
NEW YORK -- In the last few days, manager Aaron Boone has moved some things around with the lineup for the New York Yankees.

Sports News // 5 years ago
Washington Nationals win fourth straight
With the Nationals facing an uphill climb to get back in the divisional race in mid-September, Jayson Werth is sharing his past experiences with teammates.
Entertainment News // 7 years ago
50 Cent's first pitch at a New York Mets game is one of the worst throws of all time
Rapper 50 Cent's first pitch at the New York Mets game on Tuesday night is downright embarrassing.
Sports News // 7 years ago
White Sox defeat Yankees 3-2
Chris Sale led the Chicago White Sox to a 3-2 win over the New York Yankees on Thursday to open a four-game series.
Sports News // 7 years ago
Yankees beat Mets 1-0
Despite impressive Major League debuts from starters Chase Whitley and Jacob deGrom, it was a veteran outfielder who played the biggest role in the finale of the annual Subway Series.

Alfonso Guilleard Soriano (born January 7, 1976 in San Pedro de Macoris, Dominican Republic) is a Major League Baseball outfielder for the Chicago Cubs. He previously played for the New York Yankees, Texas Rangers and Washington Nationals. He played primarily as a second baseman for the Yankees and Rangers. He bats right-handed, and has batted as a lead-off hitter for most of his career.

Soriano began his professional baseball career in Japan with the Hiroshima Toyo Carp, training at their Carp Academy for Dominican players. In 1997, he was promoted to the varsity team, and, wearing uniform number 74, he appeared in nine games, batting .118 (2 for 17) with two walks.

Soriano disliked the intense Japanese practice schedule, and the Carp denied him a salary increase from $45,000 to $180,000 per year. Like Hideo Nomo and Hideki Irabu, who had previously left Japan to play in the United States, Soriano hired Don Nomura to help his situation. After first attempting to void Soriano's NPB contract by unsuccessfully arguing that the player was legally a minor when he signed it, Nomura advised him, like Nomo, to retire from NPB and pursue a career in MLB. This prompted Carp executives to file an injunction against Soriano, and to send letters to MLB teams demanding that they cease all negotiations with him. After the Nomo case, NPB officials had amended the Working Agreement without consulting any MLB officials in an attempt to prevent the situation from recurring. Since MLB had not agreed to any changes to the agreement, MLB Commissioner Bud Selig declared that MLB would recognize Soriano as a free agent on July 13, 1998, and the Carp backed down.

FULL ARTICLE AT WIKIPEDIA.ORG
This article is licensed under the GNU Free Documentation License.
It uses material from the Wikipedia article "Alfonso Soriano."
Back to Article
/