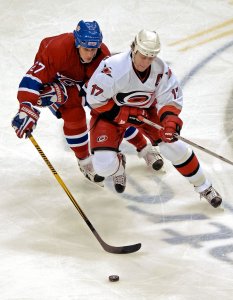 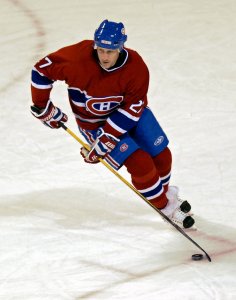 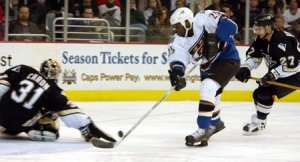 As I said when I returned to the Rangers last season, I am happy to be back in New York with such a great organization

Alexei Vyacheslavovich "Alex" Kovalev (Russian: Алексей Вячеславович Ковалёв; born February 24, 1973) is a Russian professional right winger currently playing for the Ottawa Senators of the National Hockey League (NHL). He has previously played for the Montreal Canadiens, the Pittsburgh Penguins, and the New York Rangers, with whom he was originally drafted and won a Stanley Cup in 1994. His nicknames among fans include Kovy, AK-27, and l'Artiste.

Alexei Kovalev was drafted by the New York Rangers in the 1991 NHL Entry Draft, first round, 15th overall. He became the first Russian born player to be drafted in the first round in the history of the NHL. Best known for his stickhandling skills, dangling and wrist shot, he became an important part of the Rangers 1994 Stanley Cup run, finishing with the third-most points for New York in the playoffs. Kovalev, Alexander Karpovtsev, Sergei Nemchinov, and Sergei Zubov were the first Russians to have their names engraved on the Stanley Cup. The Rangers' Stanley Cup win is one that Europe would never forget because of the first Russian names on the Stanley Cup, as MSG Network broadcaster Al Trautwig said in an essay for Garden of Dreams.

During the 1994–95 NHL lockout, Kovalev returned to Russia to play for his hometown team Lada Togliatti, the defending International Hockey League champion from 1994. Kovalev scored 8 goals and 8 assists in 12 games. Kovalev occasionally stops in Tolyatti to give clinics at his old hockey school. He also participated in the Lada Tolyatti 30th anniversary game, and scored a hat trick for the Lada veterans team.

FULL ARTICLE AT WIKIPEDIA.ORG
This article is licensed under the GNU Free Documentation License.
It uses material from the Wikipedia article "Alexei Kovalev."