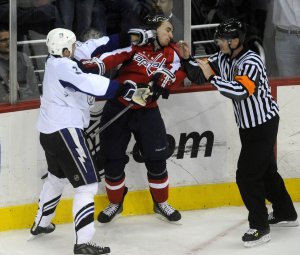 Picard was drafted in the first round, 8th overall, by the Columbus Blue Jackets in the 2004 NHL Entry Draft. After playing four full seasons in the Quebec Major Junior Hockey League (QMJHL), Picard joined the Blue Jackets' AHL affiliate, the Syracuse Crunch, for the 2005–06 season. He made his National Hockey League (NHL) debut with the Blue Jackets the same season.

On March 3, 2010, Picard was traded by the Blue Jackets to the Phoenix Coyotes for Chad Kolarik.

FULL ARTICLE AT WIKIPEDIA.ORG
This article is licensed under the GNU Free Documentation License.
It uses material from the Wikipedia article "Alexandre Picard."
Back to Article
/