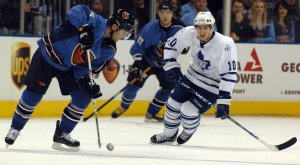 NHL // 2 years ago
Blues bid to get back on track against Predators
Last February, the beginning of the end for Mike Yeo unfurled in Nashville, although no one suspected it at the time.

NHL // 2 years ago
Wild return home to face Capitals
Put away those suitcases. Forget those late-night flights across western Canada. And shelve those late-morning breakfasts at hotel restaurants.

Steen played for Frölunda HC from 1999 to 2004. He spent the 2004–05 season with Modo Hockey after a highly controversial signing.

In the 2002 NHL Entry Draft, Steen was selected in the first round by the Toronto Maple Leafs, 24th overall. He played his first game with the Leafs on October 5, 2005 during the season opener against the rival Ottawa Senators, and registered a minor penalty.

FULL ARTICLE AT WIKIPEDIA.ORG
This article is licensed under the GNU Free Documentation License.
It uses material from the Wikipedia article "Alexander Steen."
Back to Article
/