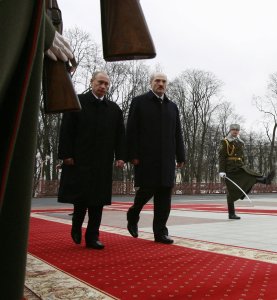 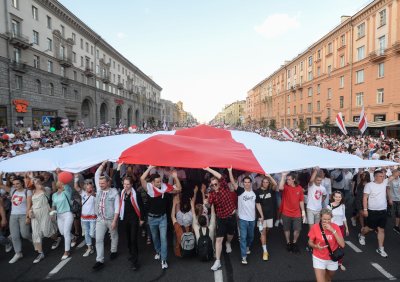 Voices // 3 months ago
Russia: Joe Biden brings new U.S. challenge to Vladimir Putin's back yard
Russia's reaction to the announcement of Joe Biden's victory in the U.S. elections has been very muted.

World News // 4 months ago
EU agrees to sanction Lukashenko
European Union has agreed to sanction Belarusian President Aleksandr Lukashenko and other high-ranking officials as the country's security forces have been permitted to use lethal force against protesters. 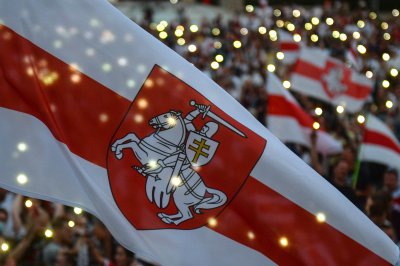 If things go wrong with Russia, do not bow down (to it), do not whine and weep, seek fortune in a different part of the globe

Lukashenko calls for non-Russian partners May 29, 2009

I have repeatedly noted the importance of relations with the U.S. and hope that the new U.S. administration will realize the hopelessness of dialogue with us from the position of force and in the language of sanctions

That time we discussed anti-crisis measures and the economic situation, but a package of problems remains to be discussed. It would be very good to discuss foreign political aspects, in order to avoid differences in interpretation

The color revolution virus affects only weak countries, Belarus does not have any breeding ground for this

We must strongly and consistently oppose the unconscionable scenario of the 'colored revolutions,' which are written as a blueprint in the capitals of other countries

Alexander Grigoryevich Lukashenko (Belarusian: Аляксандр Рыгоравіч Лукашэнка, ; Romanized: Alyaksandr Ryhoravich Lukashenka; Russian: Александр Григорьевич Лукашенко, ; Romanized: Aleksandr Grigoryevich Lukashenko; born 30 or 31 August 1954) has been serving as the President of Belarus since 20 July 1994. Before his career as a politician, Lukashenko worked as director of a state-owned agricultural farm. Under Lukashenko's rule, Belarus has come to be viewed as a state whose conduct is out of line with international law and whose regime is considered to grossly violate human rights. Belarus has never held a poll seen as fair by international monitors since Lukashenko began his presidency. Belarus has been called “the last true remaining dictatorship in the heart of Europe” by the former U.S. Secretary of State Condoleezza Rice. He and other Belarusian officials are also subject of the sanctions imposed by the European Union for egregious human rights violations.

Lukashenko was born on 30 or 31 August 1954 in the settlement of Kopys in the Vitebsk voblast of the Belorussian Soviet Socialist Republic. Trokhym Lukashenko, grandfather of Lukashenko – was born in the Sumy Oblast of Ukraine. Lukashenko grew up without a father in his childhood, leading him to be taunted by his schoolmates for having an unmarried mother. He graduated from the Mogilev Pedagogical Institute in 1975 and the Belarussian Agricultural Academy in 1985. He served in the Border Guard (frontier troops) from 1975 to 1977 and in the Soviet Army from 1980 to 1982. Lukashenko led a Komsomol chapter in Mogilev from 1977 to 1978. While in the Soviet Army, Lukashenko was an officer of the 120th Motorised Rifle "Guard" Division, which was based in Minsk. After leaving the military he became the deputy chairman of a collective farm in 1982 and in 1985. He was promoted to the post of director of the Gorodets state farm and construction materials plant in the Shklov district.

In 1990, Lukashenko was elected as a Deputy in the Supreme Council of the Republic of Belarus. He was the only deputy of the Belarusian parliament who voted against ratification of the December 1991 agreement that dissolved the Soviet Union and set up the Commonwealth of Independent States in its place.

FULL ARTICLE AT WIKIPEDIA.ORG
This article is licensed under the GNU Free Documentation License.
It uses material from the Wikipedia article "Alexander Lukashenko."
Back to Article
/