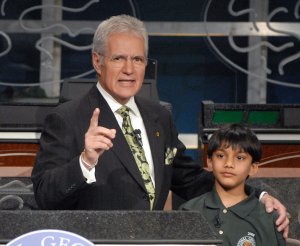 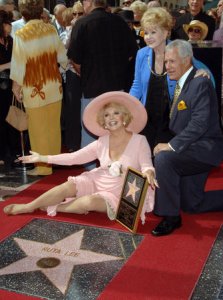 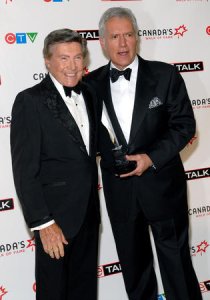 TV // 9 months ago
Mike Richards steps down as future 'Jeopardy!' host due to past comments
Mike Richards is stepping down as the future host of "Jeopardy!" due to the resurfacing of controversial remarks he made in the past.

George Alexander "Alex" Trebek (pronounced /trɨˈbɛk/; born July 22, 1940) has been the host of the game show Jeopardy! since 1984, and prior to that, he hosted game shows such as Pitfall and High Rollers. He has appeared in numerous television series, usually as himself. A native of Canada, he became a naturalized United States citizen in 1998.

Trebek was born in Sudbury, Ontario, the son of Lucille (née Lagacé, which was the name of the street he grew up on), a Franco-Ontarian, and George Edward Trebek, a Ukrainian-Canadian immigrant. He was educated at a Jesuit school before graduating from Toronto's Malvern Collegiate Institute in 1958, and later the University of Ottawa with a degree in philosophy. As a student at the University of Ottawa, he was a member of the English Debating Society. Interested in a career in broadcast news, he began his broadcasting career working for the CBC as a newscaster and sportscaster. Trebek specialized in national news and covering a wide range of special events for the CBC's radio and television divisions, including curling and horse racing.

Trebek once attended Collège Militaire Royal de Saint-Jean, in Saint-Jean-sur-Richelieu, Québec, Canada, but for only six days. Trebek briefly talked about his military school experiences in a 2003 interview in Esquire magazine.

FULL ARTICLE AT WIKIPEDIA.ORG
This article is licensed under the GNU Free Documentation License.
It uses material from the Wikipedia article "Alex Trebek."