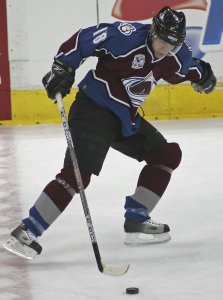 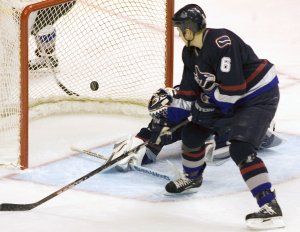 Alexandre Tanguay (born November 21, 1979) is a Canadian professional ice hockey winger currently with the Calgary Flames of the National Hockey League (NHL). He has additionally played with the Colorado Avalanche, Montreal Canadiens and Tampa Bay Lightning in the NHL and briefly for HC Lugano in the Swiss National League A in 2004. An offensive player, he is best known for his passing and playmaking ability.

An alumnus of the Halifax Mooseheads of the Quebec Major Junior Hockey League, Tanguay is the team's all-time leading scorer and had his jersey retired. During his junior career, he was also a member of Canada's under-20 team at the 1998 World Junior Championships. Selected in the first round, 12th overall, by the Colorado Avalanche at the 1998 NHL Entry Draft, he began his NHL career with Colorado in 1999. Tanguay won a Stanley Cup with Colorado in 2001, scoring the championship-winning goal in Game 7 against the New Jersey Devils. Individually, he was nominated for the Calder Memorial Trophy following his rookie season and was chosen to the 2004 All-Star Game during his six-year tenure with Colorado. In July 2006, he was traded to the Flames and spent two years with the club before single-season stints with the Montreal Canadiens and Tampa Bay Lightning. In July 2010, he returned to Calgary, signing as an unrestricted free agent.

Following a season of midget AAA hockey with the Cap-de-Madeleine Estacades, Tanguay joined the Halifax Mooseheads of the Quebec Major Junior Hockey League (QMJHL) for the 1996–97 season. He played 70 games, scored 27 goals and 68 points and was named to the QMJHL All-Rookie Team. The following season, he improved to 47 goals and 85 points in 51 league games. He was a member of the 8th place Canadian junior team at the 1998 World Junior Hockey Championship, finishing second in team-scoring with three points in seven games.

FULL ARTICLE AT WIKIPEDIA.ORG
This article is licensed under the GNU Free Documentation License.
It uses material from the Wikipedia article "Alex Tanguay."
Back to Article
/