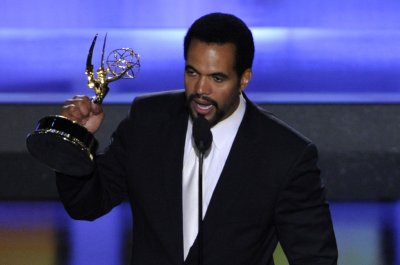 U.S. News // 4 years ago
Top Democrat Reid bids farewell after 30 years in Senate, with Hillary Clinton on hand
After a rigorous three decades in the U.S. Senate, top Democrat Harry Reid was nostalgic on Thursday as he delivered his long-awaited farewell to Capitol Hill.

Top News // 4 years ago
The Almanac
On Aug. 11, 1984, in an off-air radio voice check, President Ronald Reagan joked, "My fellow Americans, I'm pleased to tell you today that I've signed legislation that will outlaw Russia forever. We begin bombing in 5 minutes."

Entertainment News // 5 years ago
Laurence Fishburne to star in 'Roots' remake
In 1977, ABC released the "Roots" mini series based on the book by Alex Haley; 38 years later, A&E is remaking the groundbreaking mini series.

TV // 5 years ago
LeVar Burton to executive produce 'Roots' remake
"Roots" actor LeVar Burton will executive produce a remake of the ABC miniseries based on Alex Haley's novel to air on History, A&E and Lifetime.
TV // 7 years ago
History Channel to remake 'Roots' miniseries
History Channel is planning to make an 8-hour miniseries based on Alex Haley's 1976 novel "Roots: The Saga of an American Family," EW.com reported Tuesday.
Odd News // 7 years ago
The almanac
UPI Almanac for Sunday, Aug. 11, 2013.

Alexander Murray Palmer Haley (August 11, 1921 – February 10, 1992) was an African-American writer. He is best known as the author of Roots: The Saga of an American Family and the co-author of The Autobiography of Malcolm X.

Haley was born in Ithaca, New York on August 11, 1921, and was the oldest of three brothers and a sister. Haley lived with his family in Henning, Tennessee before he returned to Ithaca with his family when he was five years old. Haley's father was a professor of agriculture at Cornell University, and a decorated World War I veteran. The younger Haley always spoke proudly of his father and the incredible obstacles of racism he had overcome. Alex Haley was enrolled at Alcorn State University at age 15. Two years later he returned to his parents to inform them of his withdrawal from college. Simon Haley felt that Alex needed discipline and growth and convinced his son to enlist in the military when he turned 18. On May 24, 1939, Alex Haley began his twenty-year enlistment with the Coast Guard.

He enlisted as a mess attendant and then became a Petty Officer Third Class in the rate of Steward, one of the few rates open to African Americans at that time. His Coast Guard service number was 212-548. It was during his service in the Pacific theater of operations that Haley taught himself the craft of writing stories. It is said that during his enlistment he was often paid by other sailors to write love letters to their girlfriends. He talked of how the greatest enemy he and his crew faced during their long sea voyages wasn't the Japanese but boredom.

FULL ARTICLE AT WIKIPEDIA.ORG
This article is licensed under the GNU Free Documentation License.
It uses material from the Wikipedia article "Alex Haley."
Back to Article
/