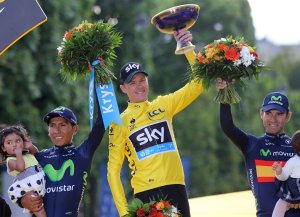 Alejandro Valverde Belmonte (born April 25, 1980 in Las Lumbreras, Murcia) is a Spanish road racing cyclist currently under suspension. He last rode for UCI ProTour team Caisse d'Epargne. Valverde's biggest wins have been the 2009 Vuelta a España, the Liège–Bastogne–Liège in 2006, 2008 and 2006 UCI ProTour series championship. He has twice collected the silver medal in the UCI Road World Championships, in 2003 and 2005. Valverde is rare in combining different specialities in road bicycle racing, being a strong climber, time trialist and sprinter. After a lengthy court battle, he was suspended for two years as part of the Operación Puerto blood doping investigation.

Valverde came from a cycling family, his father Juan was an amateur bicycle racer and bought him a bike when he was six years old. His brother Juan Francisco was also an amateur road racing cyclist. Valverde's first race was in Jumilla, in his region of Murcia, and he finished second. On the following week he won his second race in Yecla. He allegedly took more than fifty consecutive victories between 11 and 13 years old, earning him the nickname El Imbatido (The Unbeaten).

FULL ARTICLE AT WIKIPEDIA.ORG
This article is licensed under the GNU Free Documentation License.
It uses material from the Wikipedia article "Alejandro Valverde."