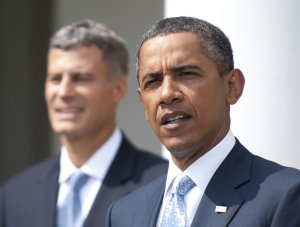 In the beginning, Build America Bonds helped fill a critical hole in the municipal finance market left by the financial crisis

Alan Bennett Krueger (born September 17, 1960) is an American economist, Bendheim Professor of Economics and Public Affairs at Princeton University and Research Associate at the National Bureau of Economic Research. On March 7, 2009, he was nominated by President Barack Obama to be United States Assistant Secretary of the Treasury for economic policy. In October 2010, he announced his resignation from the Treasury Department, to return to Princeton University. He is among the 50 highest ranked economists in the world according to IDEAS/RePEc. On August 29, 2011, he was nominated by Obama to be chairman of the White House Council of Economic Advisers.

Krueger grew up in Livingston, New Jersey, and graduated from Livingston High School in 1979.

Krueger developed and applied the method of natural experiments to study the effect of education on earnings, the minimum wage on employment, and other issues.

FULL ARTICLE AT WIKIPEDIA.ORG
This article is licensed under the GNU Free Documentation License.
It uses material from the Wikipedia article "Alan Krueger."
Back to Article
/