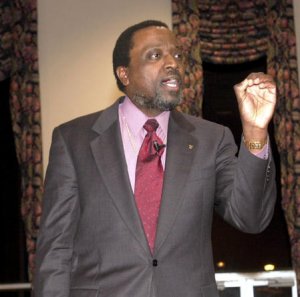 From the point of view of the things I deeply believe in to be right and necessary, Barack Obama is wrong and taking the wicked and evil position on every single one of them

There is no way on this Earth that I would leave the good people of the Republican Party I've met prey to some of the leadership I've seen ... that is corrupt, that lacks integrity and has betrayed their best values and their best interests

We have a future, but we're not going to be allowed to get to that future because a troll is sitting under a bridge, saying 'I eat first,'

The essence of ... family life remains procreation. If we embrace homosexuality as a proper basis for marriage, we are saying that it's possible to have a marriage state that in principal excludes procreation and is based simply on the premise of selfish hedonism

Alan Lee Keyes (born August 7, 1950) is an American conservative political activist, author, former diplomat, and perennial candidate for public office. A doctoral graduate of Harvard University, Keyes began his diplomatic career in 1979 at the United States consulate in Mumbai, India and the United States embassy in Zimbabwe. President Ronald Reagan appointed Keyes as Ambassador to the United Nations Economic and Social Council and Assistant Secretary of State for International Organizations; in his capacities as a UN ambassador, among Keyes's accomplishments was contributing to the Mexico City Policy.

He ran for President of the United States in 1996, 2000, and 2008, and was a Republican nominee for the U.S. Senate in 1988, 1992, and 2004. Keyes served in the U.S. Foreign Service, was appointed Ambassador to the Economic and Social Council of the United Nations under President Ronald Reagan, and served as Assistant Secretary of State for International Organization Affairs from 1985 to 1987.

FULL ARTICLE AT WIKIPEDIA.ORG
This article is licensed under the GNU Free Documentation License.
It uses material from the Wikipedia article "Alan Keyes."
Back to Article
/