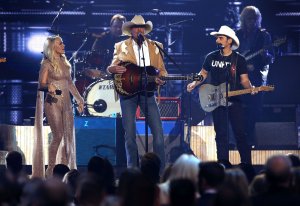 Music // 3 months ago
Alan Jackson to launch 'Last Call' tour in June
Alan Jackson announced his "Last Call: One More for the Road" tour after going public with his Charcot-Marie-Tooth disease diagnosis.

Entertainment News // 7 months ago
CMA Awards: How to watch, what to expect
The 55th annual Country Music Association Awards will air live Wednesday from the Bridgestone Arena in Nashville.

Music // 1 year ago
J. Cole's 'Off-Season' tops U.S. album chart
Rapper, singer and songwriter J. Cole's "The Off-Season" is the No. 1 album in the United States.

Music // 1 year ago
ACM Awards: How to watch, what to expect
The 56th annual Academy of Country Music Awards is taking place Sunday on CBS.

Music // 2 years ago
Alan Jackson to perform drive-in concerts in June
Country music singer Alan Jackson will perform for fans in their cars June 5 and 6 in Alabama.

I'd lived a lot of life before I got to Nashville, and that gave me a lot of files that I pull from still today

The world's changed a lot in 20 years, but songs are pretty much about love or lost love

It's All About Him: Finding the Love of My Life

It is irrelevant, it is intended as bad character evidence, and it threatens undue prejudice, confusion of the issues and could mislead the jury

Alan Eugene Jackson (born October 17, 1958) is an American country music singer, known for blending honky tonk and mainstream country sounds and penning many of his own hits. He has recorded 14 studio albums and several compilations, all on the Arista Nashville label. More than 50 of his singles have appeared on Billboard's list of the "Top 30 Country Songs". Of Jackson's entries, 26 were number-one hits. He is the recipient and nominee of multiple awards. Jackson is also a member of the Grand Ole Opry, and he was inducted into the Georgia Music Hall of Fame in 2001.

Jackson was born to Joseph Eugene Jackson and Ruth Musick in Newnan, Georgia and has four older siblings. Jackson is of English descent. As a youth, Jackson listened primarily to gospel music. Otherwise he was not a major music fan. However, a friend of his introduced him to the music of Gene Watson, John Anderson and Hank Williams Jr. Jackson attended the local Elm Street Elementary and Newnan High School, starting a band after high school. After a time, he and his wife of six years, Denise Jackson, moved from Newnan to Nashville where Jackson hoped to pursue music full-time.

Jackson sang in church as a child. He, his father, mother, and four sisters lived in a small home. At one point, his bed was in the hallway for lack of room. His mother lives in the home to this day. His first job, at 12, was in a shoe store. He wrote his first song in 1983. He worked as a car salesman in his 20s.

FULL ARTICLE AT WIKIPEDIA.ORG
This article is licensed under the GNU Free Documentation License.
It uses material from the Wikipedia article "Alan Jackson."