U.S. News // 5 years ago
Marco Rubio seeking re-election for his Senate seat
Sen. Marco Rubio, R-Fla., said Wednesday he will run for re-election, saying he changed his mind about retiring from Congress.

U.S. News // 5 years ago
Poll: Half of Florida voters support Marco Rubio Senate re-election campaign
A Florida poll shows nearly half of voters want Marco Rubio to run for re-election to the Senate despite his rejection for the idea. 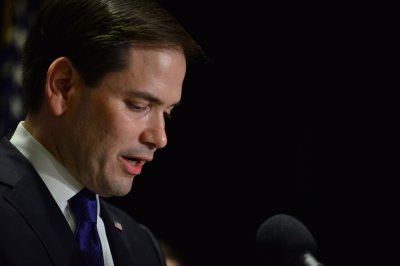 U.S. News // 5 years ago
GOP calls on Marco Rubio to jump into Fla. Senate race
Donald Trump encouraged former rival Sen. Marco Rubio to abandon plans to retire from the Senate after one term and jump back into the race to keep his seat.

U.S. News // 5 years ago
Superdelegate sets up online poll to decide which Democrat he should vote for
A Democratic Party superdelegate is allowing his supporters to vote on which presidential candidate will receive his vote at the nominating convention.

U.S. News // 5 years ago
Congressman plans to sue if Canadian-born Ted Cruz nominated for president
Congressman Alan Grayson said he would sue Senator Ted Cruz, who was born in Canada, challenging him as ineligible to be president if Republicans nominate him.

This characterization of Ms. Robertson, made during a radio interview last month in the context of the debate over whether the Federal Reserve should be independently audited, was inappropriate, and I apologize

Maybe he thinks the Hippocratic Oath says, 'Do no good.' If this is the face of the right wing in America, it's the face of cruelty

Alan Mark Grayson (born March 13, 1958) is an American attorney who is currently serving as a member of the U.S. House of Representatives from Florida's 8th congressional district. The district includes just over half of Orlando, including Downtown, as well as Celebration, Walt Disney World and part of Ocala. A progressive Democrat, Grayson defeated Ric Keller, a four-term incumbent Republican in the 2008 congressional election. He is currently running for re-election against Republican Daniel Webster.

FULL ARTICLE AT WIKIPEDIA.ORG
This article is licensed under the GNU Free Documentation License.
It uses material from the Wikipedia article "Alan Grayson."
Back to Article
/