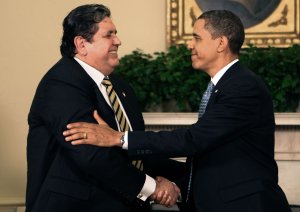 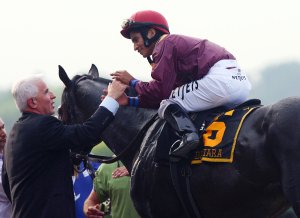 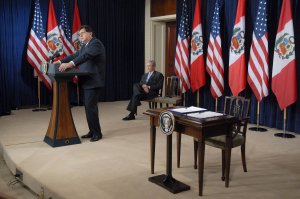 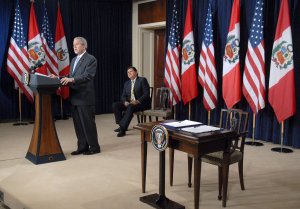 World News // 3 years ago
Ex-Peruvian president dead after shooting himself during arrest
Former Peruvian President Alan Garcia shot himself as police arrived to arrest him on bribery charges and later died of his injuries, Peruvian President Martin Vizcarra said Wednesday.

If you look at his last two races, they were both on yielding tracks and he ran brilliantly

Since the start of Unasur ... we have doubled expenditure in arms in the South American countries, so honestly, I don't know what is the use of Unasur

The first part, she galloped around and was so relaxed

He broke so good, I didn't think he was going that fast

Alan Gabriel Ludwig García Pérez (Spanish pronunciation: ; born 23 May 1949) was the President of Peru, having won the 2006 elections on 4 June 2006 in a run-off against Union for Peru candidate Ollanta Humala. He is the leader of the APRA and the only party member ever to have served as President of Peru. He served a first term as President from 1985 to 1990. His first term was marked by a severe economic crisis, social unrest and violence. He ran unsuccessfully for the Presidency in 2001, losing in a run-off to Alejandro Toledo. During his second term Peru averaged seven percent GDP growth a year, held inflation below three percent annually and collated Peru's foreign exchange reserves at US$47 billion; however his tenureship also resulted in increased environment damage according to critics and increased social conflict, according to the national human rights ombudsman's office.

García won the elections on April 14, 1985 with 45% of the votes. Since he did not receive the 50% of the votes required to win the presidency, García had to enter a run-off against Alfonso Barrantes (the leftist former mayor of Lima) of the United Left party. Barrantes, however, retired and decided not to enter the run-off, saying he did not want to prolong the political uncertainty of the country. García was thus declared president on June 1 and officially took power on July 28, 1985. For the first time in its sixty-year history, the APRA party came to power in Peru. Aged only 36, García was dubbed "Latin America's Kennedy," becoming the region's youngest president at the time, and the second youngest president in Peruvian history (the youngest was Juan Crisostomo Torrico in 1842, aged 34).

Despite his initial popularity among Peruvian voters, García's term in office was marked by bouts of hyperinflation, which reached 7,649% in 1990 and had a cumulative total of 2,200,200% over the five years, thereby profoundly destabilising the Peruvian economy. Owing to such chronic inflation, the Peruvian currency, the sol, was replaced by the Inti in mid-1985, which itself was replaced by the nuevo sol ("new sun") in July 1991, at which time the new sol had a cumulative value of one billion (1,000,000,000) old soles. During García's administration, the per capita annual income of Peruvians fell to $720 (below the level of 1960) and Peru's GDP dropped 20%. By the end of his term, national reserves were negative $900 million.

FULL ARTICLE AT WIKIPEDIA.ORG
This article is licensed under the GNU Free Documentation License.
It uses material from the Wikipedia article "Alan Garcia."