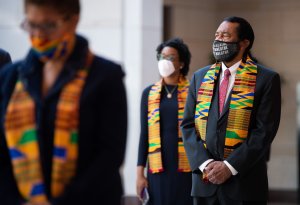 U.S. News // 1 year ago
Trump reschedules campaign rally in Tulsa 'out of respect' for Juneteenth
President Donald Trump announced he rescheduled his first rally since March in Tulsa, Okla., after receiving criticism for originally setting the event on Juneteenth.

U.S. News // 1 year ago
Sharpton: George Floyd's life won't matter until someone pays the cost for taking it
The Rev. Al Sharpton asked for support for the family of George Floyd and called for police reform at a funeral service Tuesday at The Fountain of Praise church in Floyd's hometown of Houston.

U.S. News // 2 years ago
NAACP passes resolution calling for Trump impeachment
Members of one of the United States' largest and best-known civil rights groups, the NAACP, have unanimously voted in favor of impeachment for President Donald Trump.

U.S. News // 2 years ago
House kills resolution to impeach Trump
The House voted Wednesday to kill a resolution brought by Rep. Al Green to impeach President Donald Trump in response to a series of tweets Democrats are calling racist.

I'm not looking to roll back labor costs per se, but I'm certainly looking to control it at zero increase

GM is operating in a intensely competitive North American market. Reaching an agreement prior to the deadline allows us to build momentum in the market

Albert Greene (born April 13, 1946), better known as Al Green, is an American gospel and soul music singer who was popular in the 1970s, and is a member of the Rock and Roll Hall of Fame.

Green was born in Forrest City, Arkansas. He was the sixth of ten children born to Robert and Cora Greene. The son of a sharecropper, he started performing at age ten in a Forrest City quartet called the Greene Brothers; he dropped the final "e" from his last name years later as a solo artist. They toured extensively in the mid-1950s in the South until the Greenes moved to Grand Rapids, Michigan, when they began to tour around Michigan. His father kicked him out of the group because he caught Green listening to Jackie Wilson.

Green formed a group called Al Greene & the Creations in high school. Curtis Rogers and Palmer James, two members of the Creations, formed an independent label called Hot Line Music Journal. In 1967, under the new name Al Greene & the Soul Mates, the band recorded "Back Up Train" and released it on Hot Line Music; the song was an R&B chart hit. The Soul Mates' subsequent singles did not sell as well. Al Green's debut LP was released on Hot Line in 1967 called "Back Up Train". The album was upbeat and soulful but didn't do well in sales. This was the only album on the Hot Line label. Green came into contact with band leader Willie Mitchell of Memphis' Hi Records in 1969, when Mitchell hired him as a vocalist for a Texas show with Mitchell's band and then asked him to sign with the label.

FULL ARTICLE AT WIKIPEDIA.ORG
This article is licensed under the GNU Free Documentation License.
It uses material from the Wikipedia article "Al Green."