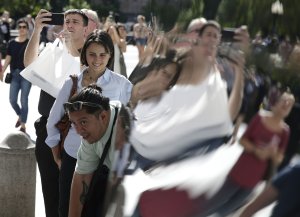 Top News // 1 year ago
The Almanac
On May 18, 1980, Mount St. Helens in southwestern Washington state erupted, blowing the top off the mountain and killing 57 people.

World News // 6 years ago
Ai Weiwei closes exhibits to protest Danish move to seize refugee assets
Protesting a decision by Denmark to seize assets of refugees to pay for their asylum, Chinese artist Ai Weiwei closed two of his exhibits.

World News // 6 years ago
Lego drops no-politics policy for bulk purchases
Lego released a statement on Wednesday announcing a change in its policy regarding bulk purchases of Lego Bricks.

World News // 6 years ago
Fans donate Legos to Chinese artist Ai Weiwei after company refuses his order
Lego has refused to sell its bricks to Ai Weiwei in a move the Chinese artist has slammed as an act of "censorship and discrimination."

We get the impression Obama doesn't want to talk about human rights on this trip, but it is precisely because of his visit here that these people are being rounded up and detained right now

Ai Weiwei (pinyin: Ài Wèiwèi; born 28 August 1957) is a Chinese artist and activist, who is also active in architecture, curating, photography, film, and social and cultural criticism. Ai collaborated with Swiss architects Herzog & de Meuron as the artistic consultant on the Beijing National Stadium for the 2008 Olympics. In addition to showing his art he has investigated government corruption and cover-ups. He was particularly focused at exposing an alleged corruption scandal in the construction of Sichuan schools that collapsed during the 2008 Sichuan earthquake. He intensively uses the internet to communicate with people all over China, especially the young generation. On 3 April 2011 police detained him at Beijing airport, and his studio in the capital was sealed off in an apparent crackdown by the Chinese authorities on political dissidents.

Ai Weiwei's father was Chinese poet Ai Qing, who was denounced during the Anti-Rightist Movement and in 1958 sent to a labour camp in Xinjiang with his wife, Gao Ying. Ai Weiwei was one year old at the time and lived in Shihezi for 16 years. In 1975 the family returned to Beijing. Ai Weiwei is married to artist Lu Qing.

In 1978, Ai enrolled in the Beijing Film Academy and attended school with Chinese directors Chen Kaige and Zhang Yimou. In 1978, he was one of the founders of the early avant garde art group the "Stars", together with Ma Desheng, Wang Keping, Huang Rui, Li Shuang, Zhong Acheng and Qu Leilei. The group disbanded in 1983. Yet Ai Weiwei participated in regular Stars group shows, The Stars: Ten Years, 1989 (Hanart Gallery, Hong-Hong and Taipei), and a retrospective exhibition in Beijing in 2007: Origin Point (Today Art Museum, Beijing).

FULL ARTICLE AT WIKIPEDIA.ORG
This article is licensed under the GNU Free Documentation License.
It uses material from the Wikipedia article "Ai Weiwei."