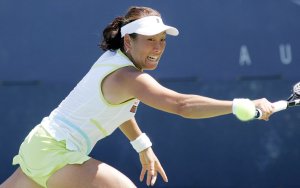 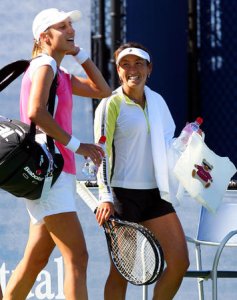 I felt tired when I was playing that second match, but actually it worked good

Ai Sugiyama (杉山愛, Sugiyama Ai?, born July 5, 1975, Yokohama, Japan) is a Japanese professional tennis player. She is a former world no.1 in women's doubles, and currently ranked world no. 5 in doubles, she is considered to be one of the best doubles player in the WTA Tour. In singles as of April 6, 2009 , she has a career-high singles ranking of world no.8 achieved on February 9, 2004. She is currently Asia's no. 4 (behind Zheng Jie, Li Na and Peng Shuai), and Japan's no. 1, ranking world no. 34 in the tour. She turned professional in 1992. In her career so far, she has won 6 singles titles and 37 doubles titles, including three Grand Slam women's doubles titles (1 with Frenchwoman Julie Halard-Decugis and 2 partnering Belgian Kim Clijsters). Ai has the all-time record, for both male and female players, for the most consecutive Grand Slam main draw appearances which currently stands at 61 making her one of the most consistent tour players . Ai is coached by her mother and plays a game based on her fitness and speed, utilizing an aggressive serve and volley whenever feasible.

In 1993, when she was only 17, Sugiyama had the honour to play against tennis legend Martina Navratilova in her native city, losing in three sets. The same year, she made her Grand Slam debut at Wimbledon but lost in the first round to world number 30 Gigi Fernández in three sets.

In 1994, Sugiyama again reached the main draw at Wimbledon but lost in her first round to world number six and compatriot Kimiko Date. Later that year she reached her first WTA Tour singles final in Surabaya but was forced to retire against Elena Wagner. She went on to win the Japan Open doubles at Tokyo, her first tour title. Later that year, she broke into the WTA Top 100.

FULL ARTICLE AT WIKIPEDIA.ORG
This article is licensed under the GNU Free Documentation License.
It uses material from the Wikipedia article "Ai Sugiyama."