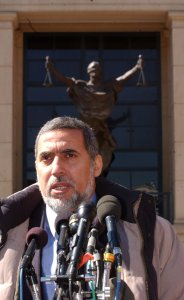 Born in Houston, Texas in 1981 and raised in Falls Church, Virginia, Abu Ali was valedictorian of his class at the Islamic Saudi Academy high school in nearby Alexandria. Abu Ali entered the University of Maryland in the fall of 1999 as an electrical engineering major, but withdrew in the middle of the 2000 spring semester to study Sharia law the Islamic University of Medina in Medina, Saudi Arabia.

In June 2003, Abu Ali was arrested by Saudi authorities while taking exams at the Islamic University of Medina. He was held for approximately twenty months by the Saudi government, and given the paucity of information coming out of Saudi Arabia about the case, many human rights organizations speculated that Abu Ali's situation was actually a case of extraordinary rendition and that he might be subject to torture.

FULL ARTICLE AT WIKIPEDIA.ORG
This article is licensed under the GNU Free Documentation License.
It uses material from the Wikipedia article "Ahmed Omar Abu Ali."