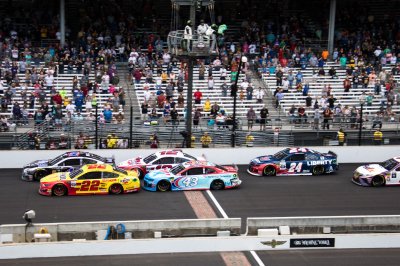 Sports News // 3 weeks ago
NASCAR finale, Notre Dame-Clemson highlight weekend sports action
Drivers will complete in NASCAR's 2020 finale on Sunday in Avondale, Ariz., to highlight the weekend sports schedule. Notre Dame and Clemson will battle Saturday in one of the most-anticipated football games of the year.

Sports News // 2 months ago
U.S. Open golf 2020: Tee times, how to watch, betting favorites
Golfers are at Winged Foot Golf Club and ready to begin play in this week's U.S. Open from Thursday through Sunday in Mamaroneck, N.Y.

Sports News // 3 months ago
Golfers Varner, Hoge, Sloan share lead at Wyndham Championship
Harold Varner III, Roger Sloan and Tom Hoge each carded 8-under par 62s for a three-way share of the lead in the first round of the 2020 Wyndham Championship.

It was a fast start, which was very handy this morning

I just came out of the gates firing this afternoon

I don't know what I can compare it to, but definitely one of my best rounds

It's been a while since I've won a four-round tour event. I seem to be the king of the rain shortened ones right now

Adam Scott (born April 3, 1973) is an American actor. He is best known for his role as Henry Pollard in the Starz comedy series Party Down. His most notable film role is probably that of the role of Derek Huff in the 2008 film Step Brothers. He currently appears on the NBC comedy Parks and Recreation as assistant city manager, Ben Wyatt.

His role as Henry Pollard earned him a nomination for a 2009 Ewwy Award for Best Actor in a Comedy Series.

Scott was born in Santa Cruz, California. He has two older siblings, Shannon and David. Scott has said that his brother David "looks like him but is far more cerebral and inherited the intellect of their parents," both of whom are retired teachers. He is a graduate of the American Academy of Dramatic Arts in Los Angeles, California.

FULL ARTICLE AT WIKIPEDIA.ORG
This article is licensed under the GNU Free Documentation License.
It uses material from the Wikipedia article "Adam Scott."
Back to Article
/