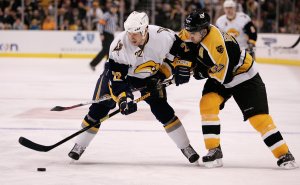 Adam Mair (born February 15, 1979 in Hamilton, Ontario) is a Canadian ice hockey center who plays for the Buffalo Sabres of the National Hockey League.

Mair was drafted 84th overall by the Toronto Maple Leafs in the 1997 NHL Entry Draft. He joined the Maple Leafs for five games in the 1999 Stanley Cup Playoffs, recording a goal and 14 penalty minutes. However, he spent the majority of the 1999–2000 season in the AHL with the St. John's Maple Leafs. The Leafs traded Mair at the Trade Deadline in 2001, acquiring defenseman Aki Berg from the Los Angeles Kings.

Mair split time in the 2001–02 season between the AHL and NHL, and was hurt for a good amount of the season. The Kings decided to trade Mair to the Buffalo Sabres on July 24, in exchange for former first round draft pick Erik Rasmussen. Mair has become a popular player, with his effort and his aggression. He has not been back to the AHL since his acquisition by the Sabres.

FULL ARTICLE AT WIKIPEDIA.ORG
This article is licensed under the GNU Free Documentation License.
It uses material from the Wikipedia article "Adam Mair."
Back to Article
/