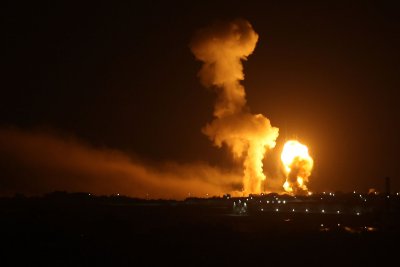 World News // 4 days ago
Israeli rockets kill 6 in Syria in clash with Islamic Jihad
Israel Defense Forces fired on targets in Syria and the Gaza Strip belonging to the Islamic Jihad movement, killing six as both groups exchanged missile attacks. 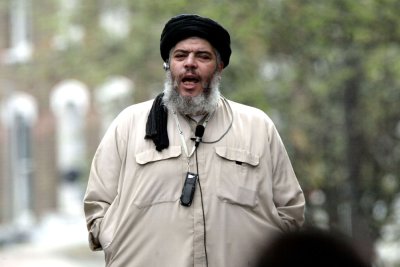 U.S. News // 5 years ago
British terror convict Abu Hamza sentenced to life in U.S. prison
Mustafa Kamel Mustafa, also known as Abu Hamza al-Masri, was sentenced Friday to life in U.S. prison for his involvement in terrorist activities.
World News // 5 years ago
U.K. extradites terror suspect Haroon Aswat to U.S.
British citizen Haroon Rashid Aswat, who is alleged to have conspired to establish a terrorist training camp in Oregon, was extradited to the U.S. on Tuesday.
U.S. News // 5 years ago
Imam of London mosque convicted of terror charges in New York City
The imam of a London mosque faces life in a U.S. prison after being convicted Monday in New York on federal terrorism charges.
U.S. News // 6 years ago
Accused terrorist seeks change of prison
Lawyers for Muslim cleric Sheik Abu Hamza al-Masri, awaiting trial on terrorism charges in New York, asked a judge to move him to another prison.
World News // 6 years ago
Suspects in British soldier's machete killing plead not guilty
Two men charged with killing British soldier Lee Rigby, who was attacked with machetes May 22 in South London, pleaded not guilty Friday, court officials said.
World News // 6 years ago
Attempt to extradite jihadist suspect Haroon Aswat to U.S. fails
The European Court of Human Rights Wednesday denied an appeal of its ban on sending terror suspect Haroon Aswat to face pretrial detention in the United States.
U.S. News // 6 years ago
Indictment against Islamist preacher accused of kidnapping left intact
A federal judge in New York has ruled that an Islamic preacher who allegedly helped kidnap U.S. citizens in Yemen must face all charges levied against him.
World News // 6 years ago
Suspect in hacking death of British soldier appears in court
Michael Adebolajo appeared in a London court for the first time Monday, nearly two weeks after he allegedly slashed to death a young British soldier.
Special Reports // 6 years ago
France deports Moroccan accused of calling for 'acts of murder'
France is continuing a crackdown on suspected Islamic radicals with the expulsion of a 24-year-old Moroccan man who allegedly called for "acts of murder."
U.S. News // 7 years ago
Hamza pleads not guilty in NYC
Abu Hamza, the radical Muslim cleric extradited from Britain after a lengthy court fight, pleaded not guilty to terrorism charges Tuesday in New York.
U.S. News // 7 years ago
Terror suspects plead not guilty
Babar Ahmed and Syed Talha Ahsan, who were extradited to the United States Friday, pleaded not guilty to terrorism charges in New Haven, Conn., Saturday.
World News // 7 years ago
Abu Hamza extradition halted
An English court halted the extradition of Abu Hamza al-Masri after the cleric offered a last-ditch appeal, a High Court spokesman said Wednesday.

The Suicide Factory: Abu Hamza and the Finsbury Park Mosqu

I couldn't believe it when I saw him. He has lost weight by not eating so much halal meat and surviving on prison food

Abu Hamza al-Masri (Arabic: أبو حمزة المصري, Abū Ḥamzah al-Maṣrī) (born 15 April 1958) is a former night club bouncer and Egyptian Sunni activist known for his preaching of a violent and politicised interpretation of Islam, also known as militant Islamism or jihadism. He is currently in prison in the United Kingdom.

Abu Hamza al-Masri was born in Alexandria, Egypt, in 1958. He is the son of a middle class army officer. In 1979, he entered the UK on a student visa. Masri's initial reaction to life in Britain was to describe it as "a paradise, where you could do anything you wanted.". He studied civil engineering at Brighton Polytechnic.

On 16 May 1980, he married Valerie Traverso (now Fleming), a Catholic convert to Islam, and had a son, Mohammed Mustafa Kamel whom Masri later separated from his mother when he was just four-years-old. She did not see him again for 12 years. He acquired British citizenship following three years of marriage and acquired a job as a bouncer for a peep show in Soho, London. In 1984, he divorced his wife. Supporters suggest that this occurred because he found out she had failed to divorce her previous husband until 1982. However, his former wife has blamed the divorce on Masri having an affair with a prostitute.

FULL ARTICLE AT WIKIPEDIA.ORG
This article is licensed under the GNU Free Documentation License.
It uses material from the Wikipedia article "Abu Hamza al-Masri."
Back to Article
/