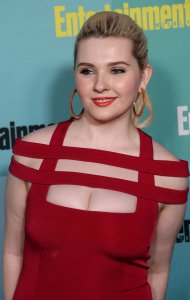 Top News // 3 years ago
The Almanac
On April 14, 1918, two U.S. pilots of the shot down two enemy German planes during World WarII, the first U.S.-involved dogfight in history.

Abigail Kathleen Breslin (born April 14, 1996) is an American teen actress. She is one of the youngest actresses ever to be nominated for an Academy Award.

Breslin appeared in her first commercial when she was three years old, and in her first movie, Signs, at the age of five. Her subsequent films include Little Miss Sunshine, Nim's Island, Definitely, Maybe, My Sister's Keeper, Zombieland and Rango.

Breslin was born in New York City, New York, U.S., the daughter of Kim, who manages her career, and Michael, a telecommunications expert, computer programmer, and consultant. Breslin has two older brothers, Ryan and Spencer, who are also actors. Breslin lives in New York with her family, which her maternal grandparents have described as "very close-knit". She is named after First Lady of the United States Abigail Adams.

FULL ARTICLE AT WIKIPEDIA.ORG
This article is licensed under the GNU Free Documentation License.
It uses material from the Wikipedia article "Abigail Breslin."