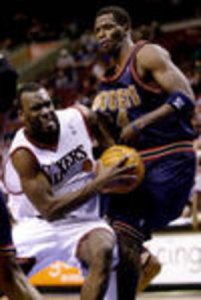 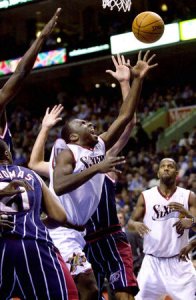 Aaron Fitzgerald McKie (born October 2, 1972, in Philadelphia, Pennsylvania) is an American professional basketball player in the NBA. Throughout his playing career, McKie has been a combo guard, playing at either point guard, shooting guard or small forward.

McKie attended Simon Gratz High School in Philadelphia and was a letterman in basketball. In basketball, as a senior, he was an All-Scholastic choice and an All-Southern Pennsylvania choice, and helped lead his team to the Public League championship and a 26 wins-4 loss record, and averaged 18.9 points, 9.9 rebounds, and 7.2 assists per game.

McKie finished his three-year career at Temple University tied for sixth on the school's all-time scoring list with 1,650 points, averaging 17.9 points per game while starting all 92 games. He was named first-team All-Atlantic 10 and he was named to the A-10 all-tournament team as a senior. As a junior, he was the 1993 Atlantic 10 Conference Player of the Year, after averaging 20.6 points per game.

FULL ARTICLE AT WIKIPEDIA.ORG
This article is licensed under the GNU Free Documentation License.
It uses material from the Wikipedia article "Aaron McKie."
Back to Article
/