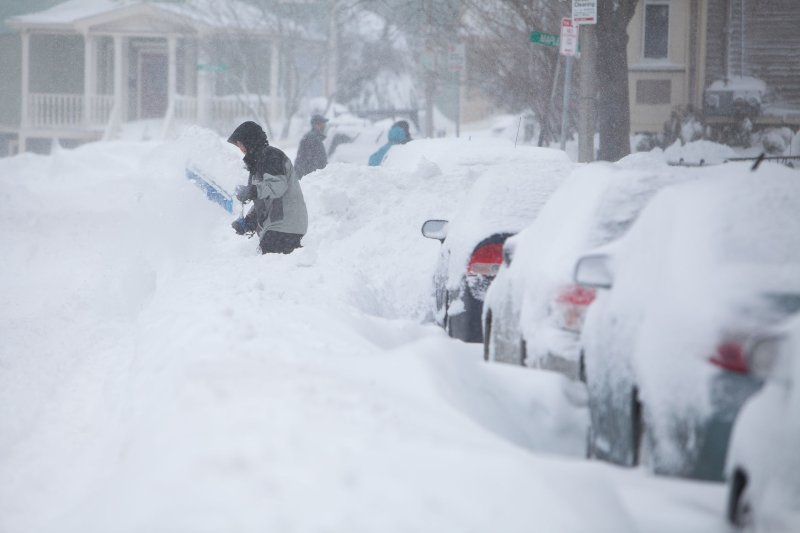 Bostonians start to dig out in Boston, Massachusetts on February 9, 2013, after a blizzard dumped more than two feet of snow in the area. (File/UPI/Jacob Belcher) | License Photo

The Farmer's Almanac is predicting bitter cold for much of the U.S. this winter, and 197-year-old publication says Super Bowl XLVIII will be a "Storm Bowl."

Though modern scientists and meteorologists don't generally support the methods used by the annual Farmer's Almanac, but the publication says its forecasts are accurate about 80 percent of the time.

Since the first almanac was published by David Young in 1818, lunar cycles, sunspots and planetary positions have factored into its secret formula.

People use the Farmer's Almanac to set wedding dates and plan gardens, and current prognosticator Caleb Weatherbee last year was only off by a few days for two of the season's biggest storms.

Out Monday, this year's almanac predicts biting cold this winter, with heavy snow in the Midwest, Great Lakes and New England.

For the first time in years, the Super Bowl will be played outdoors at the MetLife Stadium in New Jersey, and the almanac predicts a messy winter storm will hit the Northeast around that time and lead to a "Storm Bowl."

In this edition, editor Peter Geiger is leading a campaign to ditch the penny. Past campaigns have included changing the color of money and moving the Thanksgiving holiday to harvest time in October.