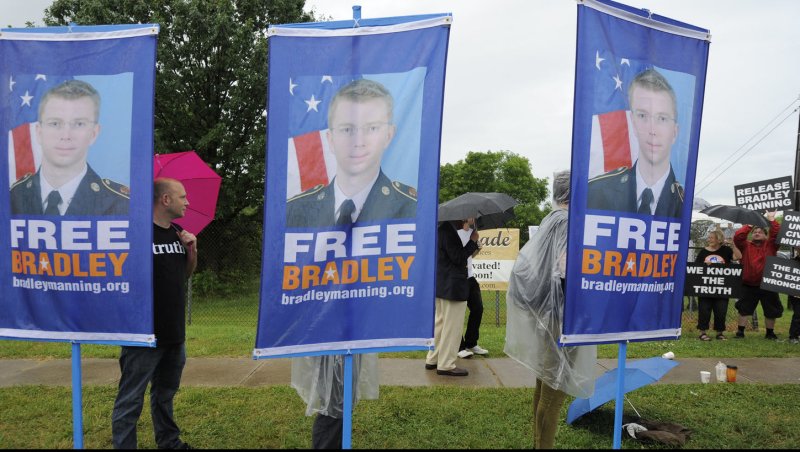 Protestors gather to protest the court martial of US Army PFC Bradley Manning, outside the front gate of Fort Meade, Maryland. Manning faces multiple charges for disclosing thousands of classified documents to WikiLeaks, and maintains that he is a whistleblower. (File/UPI/Mike Theiler) | License Photo

Manning already pleaded guilty to 10 of the 22 charges related to classified information he sent to WikiLeaks, and for those faces a possible 20 year imprisonment. He will continue to face charges of aiding the enemy and violating the Computer Fraud and Abuse Act.

The government "struggled" to present its case on the charge of aiding the enemy, bolstered by evidence from the raid on Osama bin Laden that revealed the al-Qaida leader had seen documents originally leaked by Manning.

On two occasions, Lind asked prosecutors if they would be pursuing the charge if the information had been leaked directly to The Washington Post or the New York Times, and the prosecution said it would.

Manning had first contacted reporters at both The Washington Post and the New York Times to tell them about the war logs that he ultimately sent to WikiLeaks.

Defense lawyer David Coombs referenced testimony not yet made public, which stated it was the government's reaction to WikiLeaks that drew the attention of al-Qaida. "Rhetoric is what drives the enemy to actually go look at WikiLeaks, not the actual publication of the information," Coombs said.

U.S. officials and lawmakers immediately began denouncing WikiLeaks and its founder Julian Assange after it published video of a Baghdad airstrike showing an American helicopter firing on Reuters journalists, obtained through Manning.

Once published by WikiLeaks, the New York Times, The Guardian and Der Spiegel went on to publish excerpts from the Afghan War logs, Iraq War logs, diplomatic cables and Guantanamo Bay files, obtained through Manning.

Coombs showed that Manning never indicated any intent to aid "any potential enemy that has ever, at any time, been identified by the government," and there was testimony indicating no such "aid" was achieved in any case.

The government argued that Manning is distinct from "an infantryman" and that as an intelligence analyst he would know that terrorists make extensive use of the Internet.

But Manning’s superiors testified that they never trained Army intelligence analysts on the role of WikiLeaks or whether al-Qaeda was known to access the Website.

The prosecution is seeking a life sentence in military custody with no parole for aiding the enemy, a charge that could otherwise carry a death sentence.

Lind also denied a motion to dismiss the charge of violating the Computer Fraud and Abuse Act.

The government argued that Manning's use of a widget, or software tool, to automate the process of "click, open, save" constituted a breach.

Witnesses testified that there were no restrictions or limitations on an authorized person saving documents manually, and so there had never been a restriction on using an automation tool to do so.

A government witness, Special Agent David Shaver of the Army Computer Crimes Investigating Unit, testified that the tool Manning used would not enable the download of information a user was not previously authorized to download. He added that the widget was open source and not associated with "hacking."

But the prosecution maintained the tool allowed speed, and a bulk volume of downloads that was not manually possible.

Prosecutor Capt. Joe Morrow asked defense witness Yochai Benkler, a Harvard Law Professor who wrote a widely cited academic paper about WikiLeaks and watchdog journalism, whether he agreed that the release of documents in bulk was not journalism, and Benkler disagreed.

He cited an analysis of the Iraq War logs leaked by Manning that showed civilian casualties had been far higher than official estimates. He said that a database can hold important information whether or not any single document is newsworthy on its own.

Manning, who has been in military confinement for over three years, has maintained he acted in the public interest as a whistleblower, and intended "to show the true cost of war."

"The aiding the enemy charge is not only unconstitutional, it is unnecessary," said Ben Wizner, director of the American Civil Liberties Union’s Speech, Privacy and Technology Project.

"The point of charging Manning in this way is to transform what was widely seen around the world as a valuable leak into treason," Wizner said. "The government purports to criminalize any information that is published somewhere where the enemy can see it."