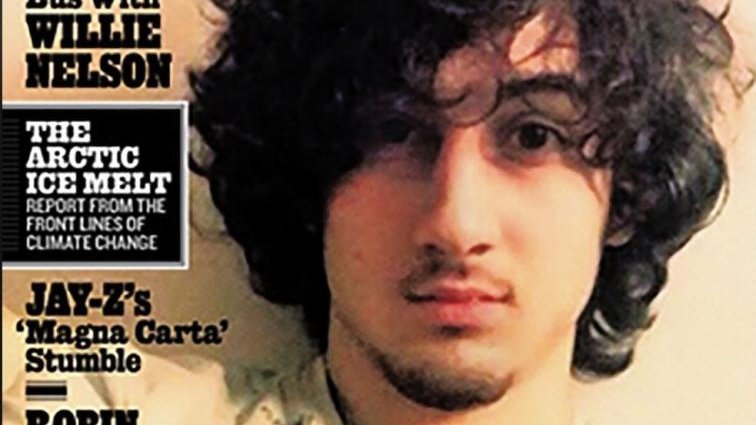 When Rolling Stone magazine unveiled its August issue Wednesday, the reaction was immediate, and it was brutal.

The person staring back from the cover was not a rock star, actor or even a particularly controversial politician. It was Boston bombing suspect Dzhokhar Tsarnaev.

The photo of Tsarnaev, taken from the 19-year-old's Facebook profile, looks like a teenager's imitation of a rockstar, particularly drawing comparisons to a 1981 cover featuring Jim Morrison.

Critics attacked the cover as insensitive and glamorizing a terrorist. TODAY said 90 percent of its viewers responded to a poll saying the cover "goes too far." Drugstore chains CVS and Walgreens said they would not sell the issue. "Rolling Stone" and "Boston" have been trending on Twitter all day, the sentiment almost entirely negative.

RELATED Goth Barbie next best seller to the original

"It is ill-conceived, at best, and re-affirms a terrible message that destruction gains fame for killers and their 'causes,'" Menino wrote. "There may be valuable journalism behind your sensational treatment, though we can’t know because almost all you released is the cover."

The celebrity treatment of criminals is one that has generated a lot of fascination, particularly around the Tsarnaev "#FreeJahar" following and recent high-profile killers such as "Dark Knight" shooter James Holmes's "Holmies."

So far, the music magazine has stood behind its decision, releasing a statement from the editors defending the decision to feature the story on the cover, posted on its Facebook page and on the story.

Our hearts go out to the victims of the Boston Marathon bombing, and our thoughts are always with them and their families. The cover story we are publishing this week falls within the traditions of journalism and Rolling Stone’s long-standing commitment to serious and thoughtful coverage of the most important political and cultural issues of our day. The fact that Dzhokhar Tsarnaev is young, and in the same age group as many of our readers, makes it all the more important for us to examine the complexities of this issue and gain a more complete understanding of how a tragedy like this happens. –THE EDITORS

The magazine's decision received some support, as well.

Rem Rieder, the former editor of the American Journalism Review and USA Today's media editor, pointed out the same photo has appeared on the front of other publications, including the New York Times, Boston Herald and Boston Globe.

That Dzhokhar selfie on the Rolling Stone cover was everywhere at the time. It was on the front page of the Times! pic.twitter.com/ix0KreMst7

"While it's understandable that people are upset by the attention to 'Jahar,' I'm not sure Rolling Stone is guilty of any journalistic war crimes," Rieder wrote. "I don't know about you, but to me calling somebody a monster doesn't sound much like glorifying him."

"It sounds like a serious effort to find out what could impel a young man to kill indiscriminately," he wrote. "That's an important journalistic mission, not an effort to glamorize evil."

While the Internet echo chamber rang with cries to boycott the issue, cancel Rolling Stone subscriptions or replace Tsarnaev's image with that of the victims, the magazine's decision is hardly unprecedented.

Other people undeserving of glamorizing -- mass murderers included -- have graced the covers of Rolling Stone and other popular magazines.

In 1938, Adolf Hitler was already a world pariah, but TIME named him their Man of the Year.

Oklahoma City bomber Timothy McVeigh was on three TIME covers. Saddam Hussein has been on the magazine's cover at least 11 times, not including the famous "red X" treatment TIME gives to dead public enemies. So was Joseph Stalin.