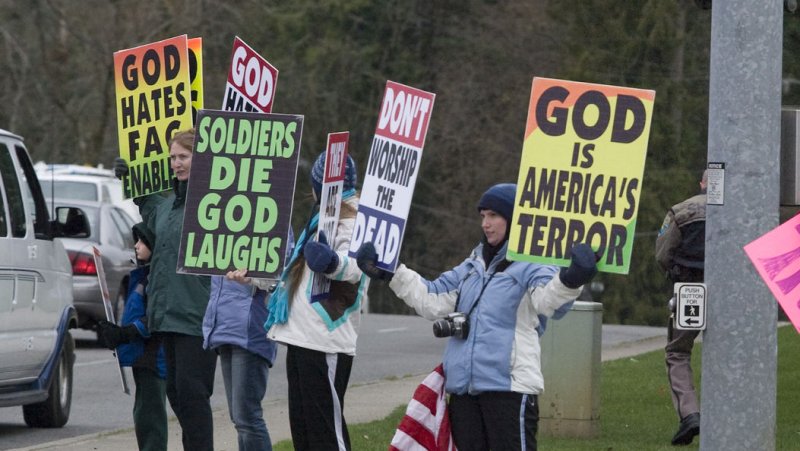 Westboro Baptist Church members protest the funeral of Sgt. 1st Class Johnny Walls on November 30, 2007. The Westboro Baptists Church from Topeka, gained notoriety by demonstrating at military funerals across the country, claiming God is killing troops in Iraq and Afghanistan to punish the United States for tolerating homosexuality. Walls died on November 2 from wounds suffered when insurgents attacked his unit with small-arms fire while serving in Afghanistan. (File/UPI Photo/Jim Bryant) | License Photo

Westboro Baptist Church, famous for their anti-gay rhetoric and funeral protests, issued a press release and posted it to Twitter. Westboro thanked god for the attack and announced their plan to picket victims' funerals.

“The federal government is classifying the bombs as a terrorist attack, but say it’s unclear if it’s of a domestic or foreign nature. Here’s a hint -- GOD SENT THE BOMBS! How many more terrifying ways will you have the LORD injure and kill your fellow countrymen because you insist on nation-dooming filthy fag marriage?!”

A “We the People” petition on the White House website asking that the church be banned from demonstrating at victims’ funerals had over 4,000 signatures by Tuesday morning.

Westboro's December plan to picket the funerals of Newtown victims was thwarted after a group of motorcyclists formed a perimeter around the funeral area. The location of a Motel 6 where church members were staying was revealed and community protesters arrived to block church members.

Earlier this month, Westboro announced plans to picket the funeral of movie critic Roger Ebert, calling him a “fag enabler.”