Father's panicked phone call to 911 after kids buried by dirt 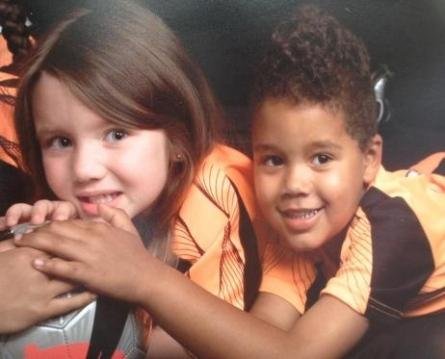 In the moments after 24 feet of clay came crashing down on two young cousins, the girl's father made a panicked phone call to emergency responders, pleading for heavy equipment to help dig them out.

"Get a crane, get a bulldozer, get anything you can please," Jordan Arwood pleaded with 911. "There's no way they can breathe."

Arwood's 6-year-old daughter Chloe, and her cousin James Caldwell, 7, had been playing in the yard and went to the bottom of the pit to retrieve a toy.

Family members said Arwood had been working on building the home in Stanley, N.C., planning to build two levels under the ground. Neighbors said they had seen Arwood digging for more than three months, and had been working on the pit with a backhoe at the time of the incident.

Lincoln County officials told WCCB Charlotte Arwood did not have a building permit.

As neighbors rushed over to help, clawing at the dirt with their bare hands, Arwood's pleas turned to prayer, begging for the children's safe return.

Rescue workers dug for hours by hand, careful not to disturb more of the dirt.

“It was a long process, but when you’re dealing with that much weight on a child, you do not put heavy machinery in there on top of them to try to get them out," Lincoln County Emergency Management spokesman Dion Burleson told WTVR Richmond. "You have to take them out by hand.”

All told, 75 workers, including structural engineers were tasked with the rescue effort that eventually became a recovery. Heavy equipment was brought in late Sunday night to stabilize the pit, and the cihldren's bodies were recovered Monday morning.