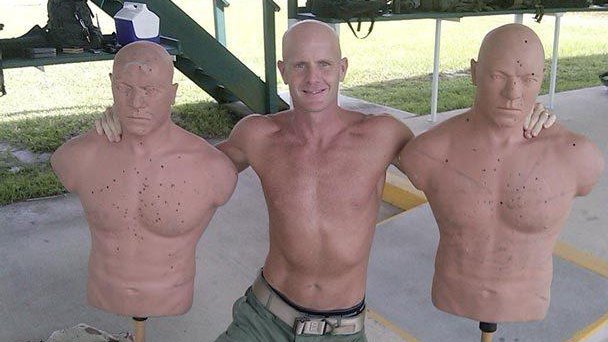 The photo of FBI Special Agent Frederick W. Humphries, sent to Jill Kelley and dozens of others, was taken after SWAT practice and shared with the caption "Which One's Fred?"

One of the stranger aspects of the strangest scandal of the year is a little less murky with the discovery of a photo of FBI Special Agent Frederick W. Humphries, shirtless, with his arms around two shirtless dummies.

Humphries reportedly sent the photo to dozens of friends and acquaintances, the Seattle Times reported, including Tampa socialite Jill Kelley, one of the women at the center of the scandal that led to the resignation of Gen. David Petraeus as director of the CIA last week.

The photo, also sent to a Seattle Times reporter in 2010, was mean to be "a tongue and cheek joke" shared with friends. The photo shows Humphries after a SWAT practice, posing in between two shirtless, bald dummies. The dummies share an uncanny likeness with the Humphries, prompting the caption "Which One's Fred?"

The photo of FBI Special Agent Frederick W. Humphries, sent to Jill Kelley and dozens of others, was taken after SWAT practice and shared with the caption "Which One's Fred?"

Kelley, who befriended top military leaders through lavish parties thrown with her husband at their Florida home, went to Humphries with concerns after she received a series of anonymous emails.

Humphries took Kelley's concerns over the emails to the FBI's cybercrimes division. The resulting investigation revealed Paula Broadwell, Petraeus's biographer and alleged mistress, as the source of the threatening emails. Kelley herself became a target of investigation when FBI officials discovered "20,000 to 30,000 pages of potentially inappropriate emails between" four-star Gen. John Allen, the commander of U.S. and NATO troop in Afghanistan and incoming supreme NATO allied commander.

According to the Seattle Times, Humphries has a history of finding himself at the center of FBI controversies.

Humphries took Kelley's concerns to the FBI cybercrime division, but later was worried that the FBI was dragging its feet — possibly for political reasons — and took his worries to U.S. Rep. Dave Reichert. Humphries' actions have resulted in him being internally investigated for sending the picture and reprimanded for interfering in the Kelley investigation, according to sources.

RELATED Petraeus: I did not pass classified info

Humphries has a history of bucking the system on principle, once agreeing to testify for the defense of convicted would-be "millennium bomber" Ahmed Ressam about Ressam's harsh treatment by the agent's colleagues after the 9/11 attacks. He was outspoken in opposing the FBI's decision at the time to turn Ressam over to agents from New York after the attacks, and warned their tough tactics were undoing the cooperation Humphries had coaxed out of the al-Qaida-trained terrorist. Eventually, Ressam ceased cooperating, as Humphries predicted.

Humphries found himself sharply criticized within the bureau. He insisted he had done right and owed it to Ressam. That same sense of right and duty may be what drove Humphries late last month to contact Reichert.

Reichert, R-Auburn, took Humphries' concerns to House Majority Leader Eric Cantor, who took the message to FBI Director Robert Mueller. Congressional leaders have since complained that they weren't told about the probe until Petraeus resigned three days after the election