Activity lead Bobak Ferdowsi, who cuts his hair differently for each mission, works inside the Spaceflight Operations Facility for NASA's Mars Science Laboratory Curiosity rover at Jet Propulsion Laboratory (JPL) in Pasadena, California on August 5, 2012. The Curiosity robot is equipped with a nuclear-powered lab capable of vaporizing rocks and ingesting soil, measuring habitability, and potentially paving the way for human exploration, and was designed to assess whether Mars ever had an environment able to support small life forms called microbes. UPI/Brian van der Brug/pool | License Photo

"Curiosity" had been bound for Mars since it hitched a ride aboard the United Launch Alliance Atlas V rocket last November from Cape Canaveral.

After 352 million miles and $2.5 billion dollars, NASA's rover finally landed on the surface of the Red Planet. Or at least, NASA hoped it will land--with is payload of fancy gadgets for studying Mars once it arrives, a lot was riding on the success of a tricky maneuver. 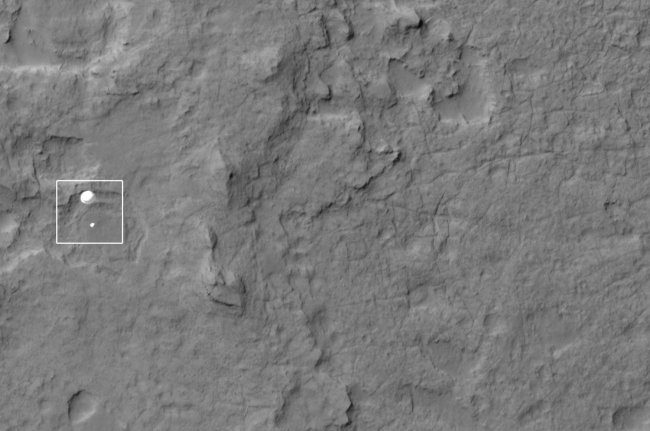 NASA's Curiosity rover and its parachute were spotted by NASA's Mars Reconnaissance Orbiter as Curiosity descended to the surface on August 5, 2012 PDT. The High-Resolution Imaging Science Experiment (HiRISE) camera captured this image of Curiosity and its parachute, seen in the center of the white box. The rover is descending toward the etched plains just north of the sand dunes that fringe "Mt. Sharp." Curiosity was released from the back shell sometime after this image was acquired. The image scale is 13.2 inches (33.6 centimeters) per pixel . UPI/NASA/JPL-Caltech/Univ. of Arizona
License photo | Permalink

Over a period of about seven minutes, the spacecraft containing Curiosity--actually a car-sized rover contained inside a larger craft--decelerated from 13,200 miles per hour to zero in the space of 390 miles.

Everything went as well as hoped, and Curiosity will spend two years exploring Mars looking for signs that our nearest planetary neighbor has or ever had the ability to support and sustain life.

You can watch a replay of the tense, giddy landing, and the jubilant celebration of the NASA scientists when it landed successfully.

"Curiosity" also sent back several photos, and later, a video of the landing from her own cameras.