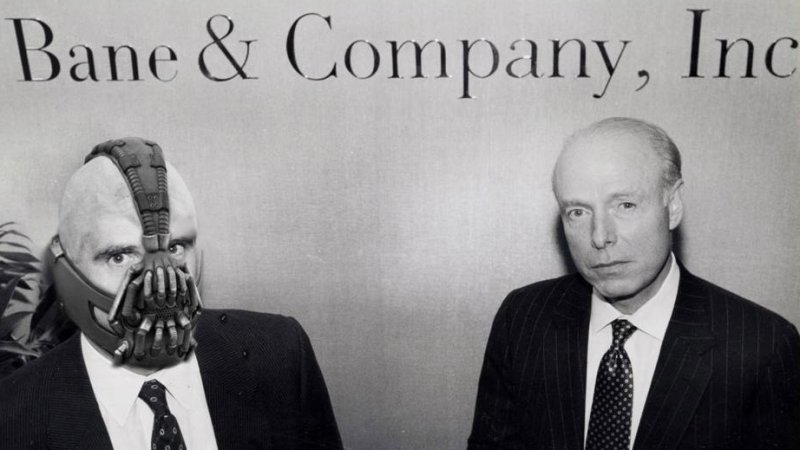 Tom Hardy as Bane and Christian Bale as Batman in "The Dark Knight Rises."

One of the year's most highly anticipated films, "The Dark Knight Rises," has entered the political fray thanks to the similar sounding names of Batman's nemesis Bane and Bain Capital, Mitt Romney's former investment firm.

Bain Capital has become a lightening rod for political attacks in recent months, with Romney's opponents questioning the Republican presidential candidate's leadership of the company.

So is it a coincidence that Batman, a beloved American superhero, has an arch nemesis by the name of Bane?

Conservative shock jock Rush Limbaugh thinks not. He targeted the latest installment in Christopher Nolan's Batman trilogy on his show Tuesday, suggesting that the film deliberately features an evil character named Bane to trick audiences into associating evil with Romney and Bain Capital.

RELATED Nolan says no more Batman for him

"The thought is that when they start paying attention to the campaign later in the year, and Obama and the Democrats keep talking about Bain, Romney and Bain, that these people will think back to the Batman movie."

"You may think it's ridiculous, I'm just telling you this is the kind of stuff the Obama team is lining up," Limbaugh continues.

Limbaugh isn't the only one to link the tale of the caped crusader to a trouble spot for the Romney campaign.

"Whether it is spelled Bain and being put out by the Obama campaign or Bane and being out by Hollywood, the narratives are similar: a highly intelligent villain with offshore interests and a past both are seeking to cover up who had a powerful father and is set on pillaging society," Lehane said.

Considering that Bane (the comic book character, if you need reminding) first appeared in comic books in the 1990s, one of his creators has cried foul.

But he also added: "Hey, if it gets Obama supporters into theaters. Maybe they'll buy thousands of Bane toys to throw at Romney. It all adds to MY Bane capital. I wonder if the Romney campaign will contact me?"

"I don’t feel there’s a left or right perspective in the film. What is there is just an honest assessment or honest exploration of the world we live in--things that worry us, as I like to say it."