By Adam Pyle, University of Toronto
1/4 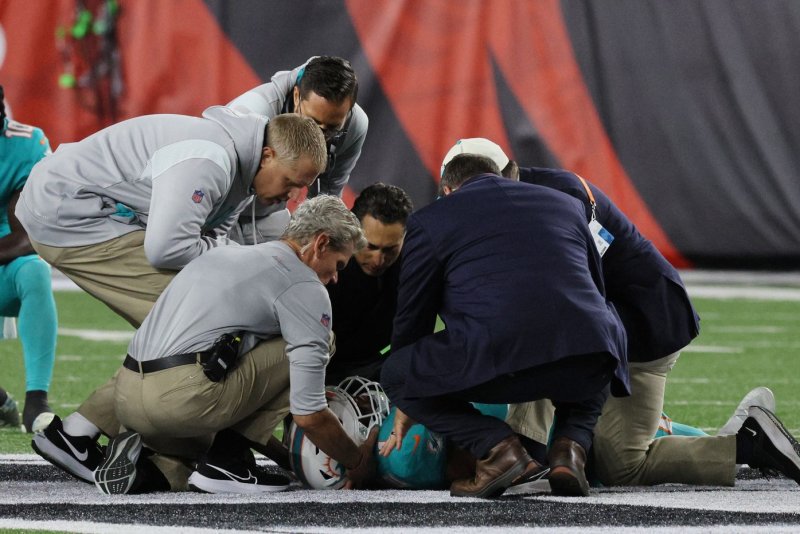 Miami Dolphins quarterback Tua Tagovailoa (1) is taken off the field after he was sacked during the first half of Thursday's game in Cincinnati. Photo by John Sommers II/UPI | License Photo

Oct. 4 (UPI) -- Few moments in sport are more gut-wrenching than a player lying on the field, limp from the impact of a high-speed collision. The crowd's visceral groans speak volumes, as they did during a game between the Miami Dolphins and the Cincinnati Bengals on Thursday.

Dolphins quarterback Tua Tagovailoa was stretchered off the field and hospitalized with a concussion.

In the days since his injury, questions have increasingly been raised about whether Tagovailoa should have been playing at all that night, and whether the NFL needs to revise its concussion protocols to prevent an episode like this occurring again.

If Tagovailoa had been playing rugby, the story of his injury would likely be very different. World Rugby, the governing body for one of the most physical contact sports, has a clear set of guidelines on concussions that map out a pathway for players' recovery that diverge markedly from the NFL and most other professional sports.

There are 12 symptoms of possible concussion that require immediate removal from a rugby game with no return to the field of play. A further series of assessments, which take at least a week, and a gradual scaling up of activity ensue in order for players to safely resume participation in contact sport.

These measures are due in no small part to rugby's high incidence of concussion (conservatively more than 2 1/2 times the rate of football and growing) and the large number of players embroiled in lawsuits related to after-effects of concussion, such as early-onset dementia.

The size of rugby players has ballooned over the past few decades. Since 1975, the average player's body mass has increased by nearly four times the amount observed in the previous 70 years. That, together with rugby players' sparse protective gear and the avalanche of lawsuits, has encouraged the game's regulatory bodies to take a far more cautious view of head injuries than almost any other sport.

World Rugby's criteria for concussion would undoubtedly have applied to Tagovailoa in a game on Sept. 25 -- in other words, four days before he played against the Bengals. He was tackled and his head struck the ground in the second quarter of a Dolphins' game against the Buffalo Bills.

After that play, he reached for his head with his hands, struggled to get to his feet and fell after a couple of steps, clear signs of concussion. He seemed to be propped up by his teammates. Yet, less than an hour later, he was cleared to play and returned to the game.

If Tagovailoa had been playing rugby, he would almost certainly have been barred from returning to that game and been kept on the sidelines on Thursday.

In the days following the Bills incident, Dolphins officials, including coach Mike McDaniel insisted that Tagovailoa was being evaluated daily and that his instability after the hit was related to back and ankle injuries.

He was cleared to start against the Bengals on Thursday, but hit his head on the ground again following a tackle in the second quarter. His symptoms pointed to indisputable neurological damage, including a potential brainstem injury. He was carried from the field on a stretcher and taken to hospital for evaluation.

According to the NFL, the unidentified specialist who assessed Tagovailoa after the first impact has since been terminated as a result of investigations into the decision to clear him for further play. The review is being conducted jointly by the NFL and the players' association, with full results expected within a week or two.

Neuroscientist Chris Nowinski of the Concussion Legacy Foundation, a not-for-profit concussion advocacy organization based in Boston, tweeted after the second head injury: "Two concussions in five days can kill someone. This can end careers."

Tagovailoa was the fifth overall draft pick in 2020, touted as a possible successor to legendary Dolphins quarterback Dan Marino. While he may have an exciting future, it is hard to argue that a third-round game, even with the Dolphins' unbeaten record on the line, was a strong enough reason to put his health at risk. So why was he cleared to play?

Coaches, players and medical providers are constantly under intense pressure to allow an injured teammate back on the field, given the millions of dollars on the line in salaries, TV rights, endorsements and advertising.

A central issue is that most concussion protocols in professional sports, including the NFL, are subject to an element of human interpretation and judgment. Precise diagnostic tools do not exist and players often under-report symptoms. This leaves doctors leaning heavily on their judgment to make quick assessments in the heat of the moment.

In the case of the NFL, the final decision of whether a player should return to the field lies not with the independent specialist, but with the team physician, adding pressure on the doctor to put the team's interests above those of the injured player.

The more conservative approach favored by professional rugby has strategic and financial consequences that may discourage its adoption by football and other sport authorities. For example, football's highly specialized positional game means that the removal of important players for concussion assessments at key times in play can have an immediate and dramatic effect on the outcome of the game.

Furthermore, far more money is involved in football than rugby.

The advantage of rugby's approach, however, is that it greatly improves the recognition and diagnosis of concussion among players. Since 2011, the number of concussions reported in professional rugby games has quadrupled, an increase largely attributed to heightened awareness and changes to protocols.

There is little evidence that the incidence of long-term brain damage is different in the two sports, since the medical consequences of concussion take decades to become evident. However, recognition and removal from play are key to preventing further harm. According to an international consensus statement on sport-related concussion issued by the Concussion in Sport Group in 2017:

The NFL has signaled that Tagovailoa's case may lead to some far-reaching changes to its rules for the evaluation and identification of concussion. Here's hoping the changes come soon enough to help the next player who suffers a serious head injury on the field.

Adam Pyle is an emergency medicine physician and lecturer at the University of Toronto.

Voices // 1 day ago
North Korea's aim to be nuclear superpower risks regional arms race
Dec. 2 (UPI) -- The recent claim by Kim Jong Un that North Korea plans to develop the world's most powerful nuclear force may well have been more bravado than credible threat. But that doesn't mean it can be ignored.

Voices // 2 days ago
Oath Keepers verdicts shed light on limits of free speech, threat from militias
Dec. 1 (UPI) -- The verdicts in a high-profile, months-long trial of Oath Keepers militia members were, as one defense lawyer acknowledged, "a mixed bag."

Voices // 3 days ago
President Joe Biden must lay out oversight for $1.7T in new public spending
The United States is about to spend a colossal amount of money, some $1.7 trillion, on infrastructure and jobs; chips and science; and the Inflation Reduction Act. Who is in charge of overseeing it?

Voices // 4 days ago
Financial speculation is worsening global food price crisis
Nov. 29 (UPI) -- When the world last experienced a major food crisis in 2008, financial speculation with food-based derivatives was seen as a contributing factor. That may be happening again.

Voices // 5 days ago
Qatar World Cup is beaming misogyny around the world
Nov. 28 (UPI) -- One of the fundamental questions relating to the 2022 World Cup being hosted by Qatar is what message this gives to women and girls around the world.

Voices // 1 week ago
FIFA's ban on World Cup rainbow armbands conflicts with its own rules
Nov. 22 (UPI) -- The 2022 men's World Cup host nation Qatar is known for its human rights abuses relating to women, migrant workers and those from the LGBTQ+ community. There has been a passive acceptance of discrimination from FIFA.

Voices // 1 week ago
What we lose with demise of Twitter: a trove of important data
Nov. 21 (UPI) -- What do a cybersecurity researcher building a system to generate alerts, a wildfire watcher and public health professionals trying to predict insurance enrollment have in common? They all rely on data from Twitter.

Voices // 2 weeks ago
Full text: Speaker Nancy Pelosi's speech on leaving House leadership
Nov. 18 (UPI) -- House Speaker Nancy Pelosi, the first woman to hold the position, announced Thursday that she would not seek re-election to a leadership post in the next session of Congress. Here is the full text of her remarks.

Voices // 2 weeks ago
Endangered by rising seas, Pacific country of Tuvalu moving to metaverse
Nov. 17 (UPI) -- The Pacific nation of Tuvalu is planning to create a version of itself in the metaverse, as a response to the existential threat of rising sea levels.
Advertisement