Roseville firefighter Kirk Steven sprays down trees as he allows fuel to be burned off next to a cabin during the Caldor fire near Meyers, Calif., on August 31. File Photo by Peter DaSilva/UPI | License Photo

Feb. 8 (UPI) -- The view from the foothills of the Sierra Nevada in Southern California can be beautiful -- pine forests and chaparral spill across an often rugged landscape. But as more people build homes in this area, where development gets into wild land, they're facing some of the highest risks for wildfires in the country.

The type of trees, plants and grasses at any location will influence how likely the area is to burn. However, our new research shows that some areas of the wildland-urban interface -- the land where development ends and wilderness begins -- are at much higher risk of burning than others. A key reason is how vulnerable the local vegetation is to drying out in a warming climate.

In a study published Feb. 7, our team of climate scientists, fire scientists and eco-hydrologists mapped out where vegetation is creating the highest fire risks across the western United States We then compared that map to where in the region people have been moving into the wildland-urban interface.

We were surprised to discover that the fastest rate of population growth by far has been in the areas with the highest fire risk. This includes several areas in California, Oregon, Washington and Texas.

When a fire does break out, the amount of area that burns increases significantly if a region's vegetation is drought sensitive, meaning it dries up easily after periods of little rainfall and hot temperatures.

Just as a succulent is better at surviving a water shortage than, say, a citrus tree, some vegetation loses moisture more quickly in dry conditions. Such diverse sensitivity can have a strong effect on wildfires. In fact, we found that under the same increase in drought-like conditions, burned area increases twice as much in the most sensitive regions as the least sensitive regions. As a result, fire hazard in regions like southern California, eastern Oregon, and central Arizona has far outstripped the average. But what about human exposure to wildfires?

We found that while the number of people living in the wildland-urban interface overall roughly doubled from 1990 to 2010, the population in its highest-hazard regions grew by 160%. As more people move into these areas, the opportunity for fires to ignite rises, as does the number of people at risk.

In all, the population of those high-hazard areas grew from 1 million in 1990 to 2.6 million in 2010, the latest year with detailed population data. That's an increase equivalent to the current populations of San Francisco and Seattle combined.

More people still live in the low-hazard regions of the wildland-urban interface, where the population grew 107%, from 5 million in 1990 to 10.4 million in 2010, but the high-hazard regions have seen much faster growth.

We don't know what is causing the population boom in these highly sensitive areas of the western United States. Building codes, timber-dependent communities and people seeking homes surrounded by forests may have contributed to the expansion of the wildland-urban interface, but those factors alone don't explain why population would rise the most in the most vulnerable regions.

However, a map of vegetation's sensitivity to water shortages can provide some insight. By linking satellite-based estimates of vegetation dryness to climate observations, we created continental-scale maps of vegetation moisture. For the first time, we now know the precise locations of the most drought-vulnerable and hence fire-prone vegetation.

The map shows that the foothills of the Sierra Nevada in Southern California, the outskirts of the San Francisco Bay Area, San Diego and San Antonio all have drought-sensitive vegetation and saw populations expand in the wildland-urban interface. 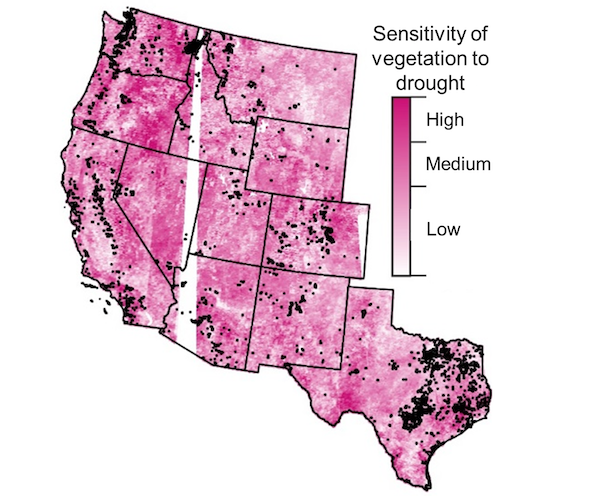 A map of vegetation sensitivity to droughts (pink) and the expansion of the wildland-urban interface between 1990 to 2010 (black) in Western states shows high-risk areas. The white streak is caused by missing satellite data. Map by Krishna Rao

Further studies examining the demographics and local land use and development regulations in such regions can shed light on the drivers of growth in these high-risk areas. In the Bay Area, for example, a lack of affordable housing has pushed people farther from cities and may be encouraging more development in the wildland-urban interface, including high-risk areas that hadn't previously been developed.

What can people do?

The disproportionate population growth in high-hazard areas is a warning that the likelihood of humans sparking a fire in an area with high-risk vegetation is rising -- and that it may be higher than was previously understood.

Property owners can keep a safe defensible space of at least a 100 feet of non-vegetated land on all sides of a home to help protect their structures when wildfires occur. Retrofitting homes using fire-retarding materials or double-paned windows can help too.

Preventive measures like these can limit the ballooning losses from wildfires, including devastating air quality due to wildfire smoke, while also allowing humans to more safely coexist with natural fires.

Preparing homes for wildfires can take months, so it's important to use the winter, when many of these areas have their wet seasons, to be ready by the time the land dries out and wildfires ramp up in spring.

Roseville firefighter Kirk Steven sprays down a tree as he allows fuel to be burned off next to a cabin during the Caldor Fire near Meyers, Calif., on Tuesday. Photo by Peter DaSilva/UPI | License Photo

Voices // 2 days ago
Renewed surge of COVID-19 adds to Iran's woes
Aug. 5 (UPI) -- A new wave of COVID-19 is sweeping across Iran, adding to the woes of the troubled Islamic state.

Voices // 5 days ago
Confidence in Supreme Court declining; no easy way to oversee justices' politics
Aug. 2 (UPI) -- There is no formal code of conduct guiding the work of the U.S. Supreme Court, which contributes to a lack of clarity regarding the ethical boundaries for justices.

Voices // 1 week ago
Shareholders are suffering most from Elon Musk's Twitter feud
July 28 (UPI) -- Elon Musk's recent highly public back and forth with Twitter has given the market whiplash.

Voices // 1 week ago
America is on fire and only the president can confront the crises
July 27 (UPI) -- America is on fire, literally and figuratively. Forest fires rage on the West coast. Temperatures soar above 100 degrees F. And perhaps most dangerously, America's political temperature has reached the boiling point.

Voices // 1 week ago
Dispirited homebuyers show Fed's inflation fight is starting to succeed
July 25 (UPI) -- I've studied finance and financial markets since the 1970s, and I have never seen the Federal Reserve's monetary policy get such prominent news coverage as it has this past year.
Advertisement