Large green containers arrived in Ukraine on Friday night from the United States, carrying "200,000 pounds of lethal aid" to defend against "growing Russian aggression," according to the U.S. Embassy. Photo courtesy of U.S. Embassy Kiev/Twitter

Jan. 25 (UPI) -- Up to 8,500 U.S. troops could soon be heading to Eastern Europe -- bolstering an American military presence on the continent that has been in decline since the end of the Cold War.

News of the possible deployment, announced Monday by the Pentagon, comes as Russia and the United States continue to maneuver in the face of an escalating crisis in Ukraine.

We are a team of researchers who study U.S. troop deployments and how they affect the security, perceptions, economy, social sphere and environment of host countries. Understanding the changing U.S. military commitment to European countries helps us understand what is at stake in Europe and U.S. credibility in the region.

U.S. President Joe Biden signaled during a press conference on Wednesday that the United States would increase its troop presence in NATO countries in Eastern Europe if Russia invades Ukraine as it seems poised to do. Just days later, he directed Secretary of Defense Lloyd Austin to place thousands of U.S. troops on heightened alert for deployment to Eastern Europe.

The decision was framed by the Pentagon as the U.S. carrying through with its obligations to protect the security of NATO allies.

While Biden acknowledges that Ukraine is not a member of NATO, he emphasized that neighboring countries Poland and Romania are, and that the United States has an obligation to protect them. A large troop deployment -- potentially to bolster NATO's existing presence in those two countries -- would meet that obligation.

The United States and Russia have historically been cautious in not placing troops in places that would be considered a provocation. They generally avoid each other's sphere of influence, even when responding to the other's deployments. Yet the NATO allies in Eastern Europe, many of which were once Soviet satellite states, provide a gray area that the United States and Russia may view as within their own sphere of influence.

Since the end of World War II, the United States has deployed hundreds of thousands of service members to Europe. These deployments were vital in not only stabilizing Western Europe following the war, but also in exerting U.S. influence in the postwar environment.

Interactions between the U.S. and European countries during this period involved the creation of a series of institutions to help structure the rules and norms of international relations. These organizations have persisted in part because the United States provides security commitments to countries that accept and promote them. The North Atlantic Treaty Organization, a military alliance established in 1949 as a bulwark to Soviet expansionism, was central to these efforts.

At its height in the late 1950s, U.S. presence in Europe consisted of about 430,000 troops, stationed in places like West Germany and the United Kingdom.

After the end of the Cold War, NATO sought to redefine its mission from one that checked Russian aggression to European stability more generally. This change in mission came with the expansion of NATO membership to Central and Eastern European countries, such as Hungary and Poland, and the Baltic States of Estonia, Latvia and Lithuania. With NATO membership came new deployments of U.S. service members to these countries.

NATO has also sought to expand its relationships with non-member states throughout Eastern and Central Europe through the Membership Action Plan, which provides advice and assistance to countries wishing to join NATO.

This eastward push came with objections from Russia in the 1990s, which has long worried about the security of its western borders with Europe. Russia's concern about NATO expanding to its border continues, as seen in President Vladimir Putin's demand that NATO forces pull back from deploying in former Soviet states.

Shift away from Europe?

If the United States follows through with beefing up its military presence in Eastern Europe, it would reverse a trend that has seen American troop numbers dwindle in Europe significantly since the end of the Cold War.

The Sept. 11, 2001, attacks in particular marked a dramatic shift in where the United States focused its troop deployments and security concerns. The beginning of the war in Afghanistan in 2001 and the 2003 invasion of Iraq brought massive changes in the United States' military position globally as it shifted focus to Central Asia and the Middle East.

Without the threat of the Soviet Union, though, public opposition to foreign deployments has also increased in the post-Cold War era.

However, rising tensions with Russia have in the recent past prompted U.S. presidents to dedicate additional military aid and deployments to Poland and the Baltic States.

This trend looks set to continue if the Pentagon does indeed deploy thousands of troops to Eastern Europe in the face of a threatened invasion by Russia of Ukraine.

Voices // 12 hours ago
Loop Current, fueler of monster hurricanes, looking a lot like year of Katrina
May 19 (UPI) -- A current of warm tropical water is looping unusually far into the Gulf for this time of year, with the power to turn tropical storms into monster hurricanes.

Voices // 2 days ago
In Midwestern schools, LGBTQ teachers face discrimination, hate and their own fears
May 17 (UPI) -- The national debate about LGBTQ issues in schools has come to the Midwest. In the wake of the passage of Florida's so-called "don't say gay" law, more than a dozen other states have proposed similar legislation.

Voices // 3 days ago
Ireland's abortion ban was a story of suffering and death
May 16 (UPI) -- If the U.S. Supreme Court overturns Roe vs. Wade, the 1973 decision that legalized abortion in the United States, the nation may find itself on a path similar to that trod by the Irish people from 1983 to 2018.

Voices // 6 days ago
Study suggests video games boost intelligence in children
May 13 (UPI) -- Many parents feel guilty when their children play video games for hours on end. Some even worry it could make their children less clever. And, indeed, that's a topic scientists have clashed over for years. 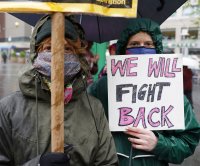 Voices // 1 week ago
Kaliningrad: Russia's 'unsinkable aircraft carrier' deep in NATO territory
May 6 (UPI) -- The Russian Baltic Fleet has announced that it carried out a series of simulated missile strikes of its nuclear-capable Iskander system in Kaliningrad.
Advertisement