Researchers have been studying samples collected from the moon by the Chinese National Space Agency during the Chang’e-5 mission. File Photo by John Angelillo/UPI | License Photo

A news vendor displays a front page story of China's lunar probe successfully landing on the moon at a news kiosk in Beijing on December 3. File Photo by Stephen Shaver/UPI | License Photo

Oct. 8 (UPI) -- Lava was still flowing on the surface of the moon 1.97 billion years ago -- and now we have the rocks to prove it. This is the result of new work from an international collaboration of planetary scientists, of which we're a part, published in the journal Science.

Together with researchers from China, Australia, Sweden and the United States, we've been studying samples collected from the moon by the Chinese National Space Agency during the Chang'e-5 mission.

Chang'e-5 was an uncrewed mission including a robotic lander, which landed on the near side of the moon (the Earth-facing side) in December. The mission returned 1.7 kilograms (about 3.7 pounds) of lunar rocks to Earth -- the first samples collected from the moon since 1976 with the Soviet Union's Luna 24 mission.

A goal of the Chang'e-5 mission was to find evidence of some of the youngest volcanic eruptions on the moon. Although scientists have previously been able to predict volcanic rocks of this age on the moon by studying the number of impact craters on the lunar surface, it is impossible to confirm this without having samples to examine.

Analysis of the samples took place using the sensitive high-resolution ion microprobe (Shrimp) instrument, at the Shrimp center in Beijing. First, the material was sorted. Our colleagues in China manually picked out several tiny fragments of basalt (a volcanic rock), roughly 2 millimeters in size, for investigation. This was followed by laboratory analyses, building on techniques developed in the 1970s for the analysis of the first Apollo samples.

The process of determining the age of the rocks was complex, but in essence, we used a focused beam of charged particles to eject material from various mineral phases in the rocks and analyzed the ejected material.

Our efforts were rewarded when we were able to determine an eruption age for these lavas of 1.97 billion years, a whole billion years younger than any previously dated basaltic lava from the Moon.

Many volcanic eruptions occurred on the moon's surface over its geological history, forming large sheets of basaltic rock, referred to as the lunar mare. These can be seen as dark patches looking up at the moon.

But most of the volcanic activity occurred between 3 billion and 4 billion years ago. Planetary scientists have confirmed this by dating basalts from the Apollo and Luna rock collections, as well as meteorites that originated from the moon. Until now though, younger volcanic rocks predicted by crater counting studies had remained elusive.

In order for volcanic eruptions to occur, heat is required on the inside of a planet to generate the molten material involved in the process. For a planet the size of the moon, it is thought that this heat would have been lost long before these eruptions 2 billion years ago.

This work has therefore opened up a new scientific mystery of how a small rocky planetary body like the moon could have retained enough interior heat to continue producing volcanic eruptions 2.5 billion years after it first formed 4.5 billion years ago.

So what's going on? While scientists have previously suggested that high concentrations of radioactive elements in the lunar interior could have melted rocky material inside the moon, the compositions of these samples indicate this was not the driving force in this case.

It remains to be seen whether so-called tidal heating could have played a role, where heat was generated in the moon's interior by the stretching and squeezing (think of an elastic band warming up through friction as you stretch it) due to gravity between the moon, Earth and sun.

Alternatively, it may be that a unique aspect of the moon's mantle composition could have resulted in a lower melting temperature, therefore explaining how the molten material was formed. Work is continuing on the samples to try to shed light on this question.

Analyzing samples from the Apollo missions in the early 1970s revolutionized our understanding of how dynamic our solar system is, and how planets form and evolve. Now, once more, this new study proves the incredible scientific value of returning samples from other planetary bodies to decode their secrets in laboratories on Earth.

Importantly, validating the crater counting approach with lunar samples also has key implications for dating the surfaces of other planets from which we haven't yet collected samples (such as Mars, Venus and Mercury). It will enhance our understanding of the solar system more broadly. 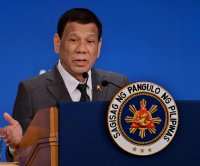 Voices // 3 days ago
Philippines is set for a fiery election, even without any Dutertes
Oct. 14 (UPI) -- After five years under Rodrigo Duterte's brutal rule, Filipinos will soon go to the polls to choose a new leader -- and potentially a new direction for the country.

Voices // 5 days ago
U.S. default on debt could cause dollar -- and standard of living -- to fall
Oct. 12 (UPI) -- Congress has seemingly kicked the debt ceiling deadline down the road -- but the threat of a future default still exists.

Voices // 1 week ago
Case before Supreme Court could topple gun restrictions
Oct. 7 (UPI) -- The stakes in one of the most significant Second Amendment cases in U.S. history are high.

Voices // 1 week ago
Russia building a sovereign Internet -- with help from Apple, Google
Oct. 5 (UPI) -- On the first day of Russia's parliamentary elections, Apple and Google agreed to demands from the Russian government to remove a strategic voting app developed by opposition leader Alexei Navalny from the app stores.

Voices // 1 week ago
Albania shines a light in the darkness, offering safe haven to Afghan refugees
Oct. 4 (UPI) -- The tiny Balkans enclave of Albania has shown the rest of the world what it means to offer a haven of safety and security to men, women and children fleeing from terror and repression by taking in Afghan refugees.

Voices // 2 weeks ago
Joe Biden's solar power expansion could be tweaked to expand benefits
Oct. 1 (UPI) -- President Joe Biden's proposal to produce 45% of the nation's electricity from solar energy by 2050 seeks to transform the power sector from problem child into child prodigy.
Advertisement