What Sept. 11 really wrought: an era of disruption

A person places flowers and a U.S. flag on the 9/11 Memorial on the 20th anniversary of the attacks in New York City. Pool Photo by Mike Segar/UPI | License Photo

An abundance of retrospectives and eulogies marking Sept. 11, some insightful, others pro forma, filled the airwaves and print media commemorating the 20th anniversary of the destruction of New York's Twin Towers and part of the Pentagon's second wing.

But despite this outpouring, every commentary seemed to have missed the most crucial consequence of that disastrous day.

That was not the global war on terror that shortly followed or the ill-conceived invasion of Iraq over weapons of mass destruction that did not exist 18 months later. Instead, what Sept. 11 wrought was the final demise of the Westphalian state-centric system that had dominated international politics since 1648.

To some, the Westphalian system seemed an abstraction of largely academic value. But that was akin to believing gravity was an abstraction with little practical application. Twenty years later, 9/11's implications are still not fully comprehended.

The international system was dependent on individual states for its conduct, regulation and matters as vital as war and peace. Sovereign states were the ultimate, legitimate arbiters of force. More often than not, international authority and influence and the overall power of a state were commensurate. The implosion of the Soviet Union did not alter this equation; it simply made the United States more influential until Sept. 12, the day after.

The al-Qaida attacks demonstrated that non-state actors and stateless organizations had the capacity and reach to deliver vast amounts of disruption and destruction even against superpowers. One crucial difference from the past was that, ironically, as standards of living improved, modern societies became extraordinarily and even existentially vulnerable to disruption. These advances had also created greater potential weaknesses.

Disruption of this scale was not new. Plagues, floods and droughts had long been catastrophic. Gavrilo Princip's handful of bullets killed an archduke and his wife, igniting World War I in August 1914.

However, today, society's power grids, Internet, financial networks and basic services for food, water and fuel, among others, are massively vulnerable. In prior history, only states controlled the means to disrupt or destroy these and other vulnerabilities on a vast scale. After Sept. 11, that condition no longer existed, effectively ending the Westphalian system of international politics.

Why is this important? Sept. 11 introduced a different era. Yet no one seems to have recognized this reality. Since 9/11, COVID-19, violent global weather, massive cyberattacks and the continuing failure of governments to govern emerged as unmistakably disruptive symptoms of this post-Westphalian world.

Indeed, a Fifth Horseman of the Apocalypse armed with a more virulent form of the Cold War MAD (for Mutual Assured Destruction and the specter of thermonuclear armageddon) has arisen symbolizing this profound transformation. The New MAD stands for Massive Attacks of Disruption, whether caused by man or by nature.

Unlike the Cold War MAD, when nuclear war was deterred, the new MAD is not fully deterrable. At best, MAD can be partially prevented, contained or minimized. Seven major disruptors are among the major dangers posed by MAD beyond the current pandemic.

The first is failed and failing government. Western democracies are suffering from this malaise and its disruptive power. Despite deniers, climate change is potentially existential. The signs of climate change are impossible to ignore.

Cyber and social media have enormous power to disrupt. Terror, especially as it assumes a greater domestic form, lurks. Last, two less obvious disruptors must not be dismissed: debt and drones.

With U.S. debt approaching 150% of GDP, how will this be repaid? No one knows. And consider how drones will disrupt future society from undertaking helpful tasks to highly sinister and disruptive roles. Suppose the Jan. 6 Capitol Hill rioters flew armed drones that are cheap and easy to build to strike both Houses of Congress?

The United States views its principal national security threats as China and Russia, the former economically and politically and both strategically and militarily. But the new MAD is at least as, if not more, dangerous, certainly in practice than these two powers. Yet, no one has raised an alarm about MAD's broader challenges, keeping focus only on COVID-19, climate and cyberthreats. Continued myopia will not work.

In early 1914, no one predicted looming calamity. In early 1939, few other than Winston Churchill saw war. 2021 will not lead to a global conflict. However, failure to acknowledge and respond to the Fifth Horseman armed with this new MAD could prove as cataclysmic as these two earlier inflection points. But who is paying attention? Harlan Ullman is senior adviser at Washington, D.C.'s Atlantic Council, the prime author of "shock and awe" and author of the upcoming book "The Fifth Horseman and the New MAD: How Massive Attacks of Disruption Became the Looming Existential Danger to a Divided Nation and the World at Large."

A bell is rung for a moment of silence during the annual 9/11 commemoration ceremony at the 9/11 Memorial on Saturday. Pool Photo by Chip Somodevilla/UPI | License Photo

Voices // 16 hours ago
The Great Resignation: American workers suffering a crisis of meaning
Oct. 26 (UPI) -- Americans are quitting their jobs in record numbers. This phenomenon has been dubbed the Great Resignation and created significant shortages of workers for businesses. 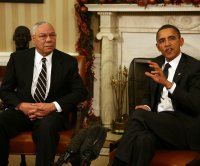