By
Sumeera Riaz, written for UPI.com

Supporters of Pakistani politician and former cricketer Imran Khan take part in a rally in Islamabad on May 12, 2013. The party of Pakistani cricket star Imran Khan conceded defeat in general elections, but said it would form the next government in the terror-hit northwestern province of Khyber Pakhtunkhwa. UPI/Sajjad Ali Qureshi | License Photo

LAHORE, Pakistan, May 29 (UPI NEXT) -- The Pakistan Tehrik-e-Insaf party, the runner-up in Pakistan's May 11 general elections, has been staging peaceful sit-in demonstrations in the country's largest cities, Lahore and Karachi, to protest alleged poll rigging.

Hundreds of PTI supporters and activists have held the protests, mainly in Lahore and Karachi.

Meanwhile, on May 19, the Election Commission of Pakistan repeated polling at 45 stations of a Karachi constituency where the PTI had complained of poll rigging. PTI Sindh Vice President, Zahra Shahid, was gunned down outside her Karachi residence a day before the second vote, highlighting post-election insecurity and triggering further PTI protests in the two metropolitan centers. PTI candidate Arif Alvi, another senior PTI leader, won the second vote.

The PTI, led by former cricketer Imran Khan, is demanding that the Election Commission hold a recount in 25 other constituencies, most in the country's eastern Punjab province.

"We will continue our protest until the Election Commission meets our demands and proves its claims of free and fair elections," said PTI activist Ammar Majeed, 28, during a sit-in protest in Lahore's Defence area.

The PTI has a large following among younger Pakistanis. An estimated 31 percent of registered voters in the May 11 elections were below the age of 30.

Although the PTI is only on track to receive 30 seats in Pakistan's National Assembly out of a total of 272, the election results are viewed as a breakthrough for the 17-year-old party.

In restive northern Khyber Pakhtunkhwa Province, where the PTI came out on top, the party has nominated Pervez Khattak as chief minister. Khattak served as provincial irrigation minister in the outgoing Pakistani government. He was previously a member of the Qaumi Watan Party but later joined the PTI.

PTI spokeswoman Shirin Mizari told UPI Next that in addition to asking for a recount in 25 constituencies, her party is asking for fingerprint verification by the National Database and Registration Authority in six National Assembly constituencies.

"The PTI has already formulated a line of action if the Election Commission does not meet our demands," Mizari told UPI Next, but would not outline her party's future strategy.

PTI demands to repeat polling are unjustified, and undermine its credibility, political and defense analyst Askari Rizvi told UPI Next.

Rizvi told UPI Next that the May 11 elections were free and fair, and that the PTI should take its complaints to one of 14 tribunals set up by the Election Commission in the wake of vote rigging allegations, rather than staging sit-ins.

Voting irregularity claims had been made by Pakistan's Free and Fair Election Network. The Islamabad-based group was established in 2006 as coalition of 30 Pakistani organizations to observe general elections and mobilize the media. Two days after the May 11 elections, it released a list of 49 polling stations where it said votes had exceeded number of registered voters, but it has since retracted the claim and apologized to the Election Commission and media.

Former Election Commission Secretary Kanwar Dilshad told UPI Next that under current law, the commission must take action if any political party produces substantive evidence to back up claims of rigging or other allegations of electoral fraud.

"I believe that the Election Commission should address PTI complaints, as it's the second political party which has secured enough votes to form a government in Khyber Pakhtunkhwa," Dilshad told UPI Next.

Election Commission Secretary Ishtiaq Ahmed rejected reports of vote rigging at a May 16 Islamabad press conference. He said that the May 11 elections were largely free and fair, adding that international observers, including European Union observers, had monitored the vote.

Ahmed announced that recounts will be held in nine national constituencies, once election tribunals have reported their findings, and that the National Database and Registration Authority has been directed to verify fingerprints where PTI complaints have been lodged. The commission is constitutionally bound to do so, in response to complaints.

In the wake of FAFEN's retracted charge of rigging, Ahmed accused the NGO of undermining voter confidence in the May 11 elections. "It's very regretful that FAFEN has disseminated wrong information among the people and international observers, which has undermined Election Commission efforts to ensure free and fair elections," Ahmed told the May 16 Islamabad press conference, held two days after FAFEN's retraction.

UPI Next // 5 years ago
Arab princes flout hunting ban on vulnerable birds, official says
Feb. 25 (News Lens Pakistan) QUETTA-- A new ban on hunting houbara bustards is being flouted by Arab princes who have been given extraordinary privileges by Pakistani authorities to hunt the bird, according to an official of the Balochistan provincial Forest and Wildlife Department. 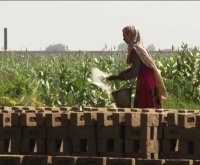 UPI Next // 5 years ago
Pakistani activists want kilns to pay working women, not their husbands
LAHORE, Pakistan, Jan. 26 (News Lens Pakistan) -- Pakistani activists urge the brick industry to change the system so women laborers are paid directly, instead of their wages going to the male heads of their families.