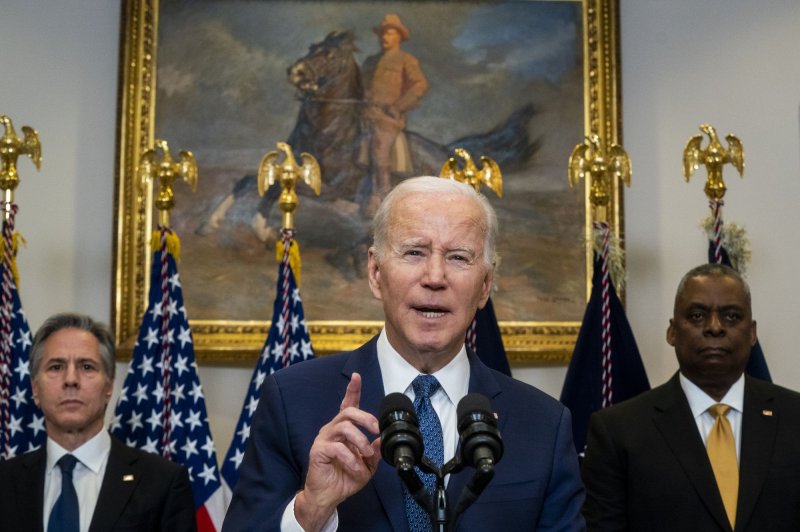 President Joe Biden (C) with Secretary of State Antony Blinken (L) and Secretary of Defense Lloyd Austin (R) as he announces the transfer of M1 Abrams tanks to Ukraine in the Roosevelt Room of the White House in Washington on Wednesday. Photo by Shawn Thew/UPI | License Photo

Jan. 25 (UPI) -- President Joe Biden said the United States will send 31 of its advanced Abrams tanks to Ukraine, along with parts, for its defense, joining Germany, which said it will send its Leopard 2 tanks.

Biden made the announcement at a noon press conference at the White House, flanked by Secretary of State Antony Blinken and Defense Secretary Lloyd Austin.

"Today's announcement builds on the hard work and commitment of countries around the world," Biden said. "Led by the United States of America to help Ukraine defend its sovereignty and territorial integrity. That's what it's all about, helping Ukraine protect and defend Ukrainian land."

Biden said Russian President Vladimir Putin counted on the United States and its European allies not to be cohesive enough to sustain Ukraine, much less share their most sophisticated weapons.

"He was wrong," Biden said. "America is united ... We approach the one-year mark on the Russian full-scale invasion of Ukraine, we remain united as ever in our conviction and cause. These tanks are further evidence of our enduring commitment to Ukraine."

Biden said it will take months before Ukrainian troops will be able to effectively operate the Abrams tanks, but the United States will provide the support needed for them.

John Kirby, coordinator of strategic communications at the National Security Council, was asked if the White House is confident that its funding to Ukraine is being used properly in light of several top Ukrainian officials being fired for corruption on Tuesday.

"That budgetary assistance is directed through the World Bank, and we're confident in that process," Kirby said. "We obviously share President Zelensky's concerns over these corruption allegations. We have not seen any signs that our budgetary assistance has fallen prey to any kind of corruption in Ukraine and I would go so far as to say the same on the security side as well."

Biden discussed how difficult it had been in the past to train on the Abrams tanks due to their high level of sophisticated technology, which Kirby also addressed. He said training, maintenance and a cohesive supply chain are all factors into keeping the tanks operating as expected on the field.

Kirby said U.S. assistance to Ukraine has and will continue to evolve as the war continues.

"What's changed are the conditions on the ground," he said. "This follows right along with the kinds of discussions we've been having with Ukrainians for months in making sure that they can fight on the terrain that they're in and they can prepare for operations going forward this year."

Kirby said the decision to provide Abrams tanks to Ukraine was made to show unity with allies, including Germany, which announced it will be sending Leopard 2 tanks to the battlefield. The decision was also made with the future of the battle in mind.

Ukraine has 31 tank battalions, which is why the United States is sending 31 tanks, Kirby clarified.

The Abrams tank is a high-mobility, low-profile assault vehicle that is used to dispatch heavily armored enemy forces. According to the U.S. Army, it is designed to increase survivability for its operators while being a lethal primary weapon on the ground.

"This decision follows our well-known line of supporting Ukraine to the best of our ability," Scholz said in a statement.

Ukrainian President Volodymyr Zelensky said in a tweet that he had spoken on the phone with Scholz and was "sincerely grateful" for the support.

The plans to send tanks to Ukraine come after Scholz and the German government for weeks resisted calls from Zelensky and other Western supporters to send the tanks to improve Ukraine's ability against more modern Russian weaponry.

The German government said its decision was made after "intensive consultations that have taken place with Germany's closest European and international partners."

Poland helped force the issue when it announced that it would send its own allotment of the German-made tanks it had on hand to Ukraine, with or without Berlin's approval.

The Leopard 2 tanks would help Ukraine even the playing field in artillery firepower. Russia used that advantage to capture areas in the Luhansk region early in the war. Technologically, the tank's systems would improve targeting and long-range firing over the old Soviet-era tanks they are now using.

One advantage over the sophisticated U.S.-made Abrams tanks: Leopards are in Europe and in the quantity they need to make a difference on the battlefield sooner. Training, repairs and logistics for the Leopard 2 would be far more streamlined, where it will take months of training before the Abrams can be deployed effectively.

"Logistics and maintenance would be easier," Minna Alander, a research fellow at the Finnish Institute of International Affairs, told The New York Times. "Spare parts and know-how are here in Europe, so the training of Ukrainians would be easier."

"The decision to send Leopards to Ukraine is a big step toward stopping Russia," he said on Twitter. "Together we are stronger."

British Prime Minister Rishi Sunak, whose nation had previously committed tanks to Ukraine, said the German tanks will help Ukraine's effort to push back Russia from its territory.

"Together, we are accelerating our efforts to ensure Ukraine wins this war and secures a lasting peace," he said on Twitter.

"I am convinced that many experts understand the absurdity of this idea as well, this plan is quite a failure in terms of technological aspects," Peskov said in a news conference. "We repeat that these tanks will burn down just like all the others. Only they cost a lot, and all this will fall primarily on the shoulders of European taxpayers."

World News // 12 hours ago
Scotland to deny trans prisoners with violent history toward women transfers to women's prison
Jan. 29 (UPI) -- The Scottish Prison System will not transfer any transgender prisoner with a history of violence toward women to a women's prison after a review over procedures last week.

World News // 15 hours ago
With tanks incoming, Ukraine shifts focus to aircraft
Jan. 29 (UPI) -- Ukraine is seeking a fleet of fighter jets to repel Russia and retake ground days after the United States and Germany agreed to send advanced tanks to the battlefield.