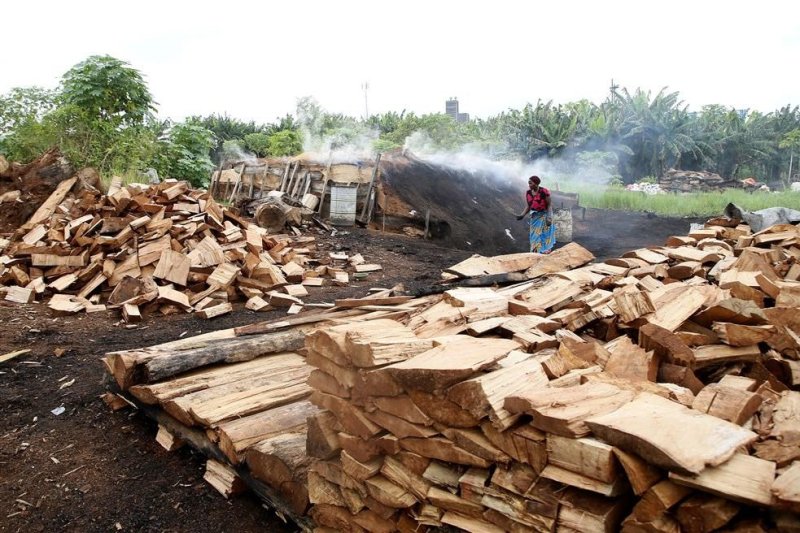 A woman works at a charcoal factory in Adzope, Ivory Coast on November 11, which has contributed significantly to deforestation in the country. The European Union agreed to ban imports from countries connected to deforestation. Photo by Legnan Koula/EPA-EFE

Dec. 6 (UPI) -- The European Union on Tuesday provisionally agreed to a new law that would ban importing products connected with deforestation, a win for environmentalists.

Companies selling products to member states will have to prove their goods are not linked to deforestation or face fines of up to 4% of their annual EU turnover.

The agreement is provisional and pending formal adoption in both the European Council and the European Parliament.

"The EU is a large consumer and trader of commodities that play a substantial part in deforestation -- like beef, cocoa, soy and timber," Marian Jurecka, Czech minister of the environment, said in a statement.

"The new rules aim to ensure that when consumers buy these products, they don't contribute to further degrading forest ecosystems. Protecting the environment around the world, including forests and rainforests, is a common goal for all countries and the EU is ready to take its responsibility."

The agreement establishes mandatory due diligence rules for all operators and traders who place, make available or export palm oil, beef, timber, coffee, cocoa, rubber and soy. The rules also apply to a number of derived products such as chocolate, furniture, printed paper and selected palm oil-based derivates used for example as components in personal care products.

"The main driver of global deforestation and forest degradation is the expansion of agricultural land, which is linked to the production of the commodities included in the scope of the regulation," The European Council said in a statement.

"As the EU is a major consumer of such commodities, it can reduce its impact on global deforestation and forest degradation by making sure these products and related supply chains are 'deforestation-free.'"

World News // 44 minutes ago
Missing radioactive capsule found by side of Western Australia highway
Feb. 1 (UPI) -- Australian authorities scouring hundreds of miles of highway for a radioactive capsule that fell off the back of a truck last week while in transit has been found, officials said.

World News // 8 hours ago
Arab countries 'headed in wrong direction,' new poll says
Jan. 31 (UPI) -- A majority of Arab citizens believe their countries are headed in the wrong direction, with most blaming the economy or diplomatic relations with Israel, according to the 2022 Arab Opinion Index.

World News // 13 hours ago
United States, Britain, Canada, Australia sanction Myanmar officials
Jan. 31 (UPI) -- The United States Treasury Department has designated individuals and entities linked to the military regime of Myanmar for sanctions. The action is being carried out in coordination with Britain, Australia and Canada.