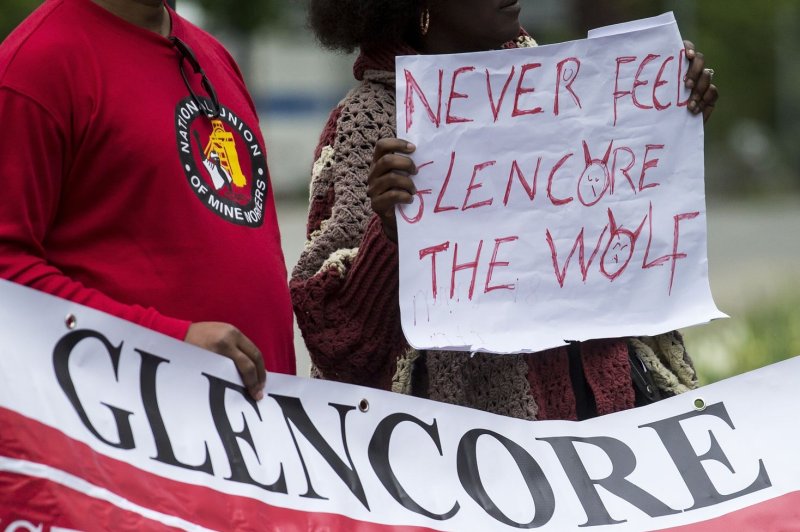 Demonstrators participate in a union protest in front of the main entrance of the casino in Zug, Switzerland, in 2018 on the occasion of the Glencore annual meeting. File Photo by Alexandra Wey/EPA-EFE

Dec. 5 (UPI) -- Glencore, a mining company based in Switzerland, settled a corruption case in the Democratic Republic of Congo on Monday for $180 million.

The company announced in a news release that the settlement covers all current and future claims from alleged corruption between 2007 and 2018.

"This includes activities in certain group businesses that have been the subject of various investigations by, amongst others, the U.S. Department of Justice and the DRC's National Financial Intelligence Unit and Ministry of Justice," Glencore said in the statement.

The U.S. Justice Department in May said in a statement that Glencore had admitted to corruption by conspiring to pay $27.5 million to illegally secure business advantages in the DRC.

"The Justice Department will continue to bring to bear its resources on these types of cases, no matter the company and no matter the individual."

The settlement announced Monday marks the latest in a series of corruption cases in which Glencore has agreed to pay more than $1.6 billion in fines, the BBC reported.

More than $1.1 billion of those fines came after the company pleaded guilty in coordinated resolutions in the United States, Britain and Brazil.

Under the settlement reached Monday, Glencore "committed to continue to implement in its resolution" with the U.S. Justice Department.

Glencore's assets in DRC include the copper-cobalt mine Mutanda and a controlling stake in the Kamoto Copper Co., one of the world's largest copper and cobalt producers.

"Glencore is a longstanding investor in the DRC and is pleased to have reached this agreement to address the consequences of its past conduct," Glencore Chairman Kalidas Madhavpeddi said.

"Glencore has actively promoted its ethics and compliance program in the DRC in recent years and looks forward to continuing to work with the DRC authorities and other stakeholders to facilitate good governance and ethical business practices in the country."

World News // 2 hours ago
Woman dies, at least 41 others rescued after migrant boat sinks off Greece
Feb. 5 (UPI) -- A woman died and dozens of others were rescued after a boat carrying migrants sunk Sunday off the coast of the Greek island Leros.