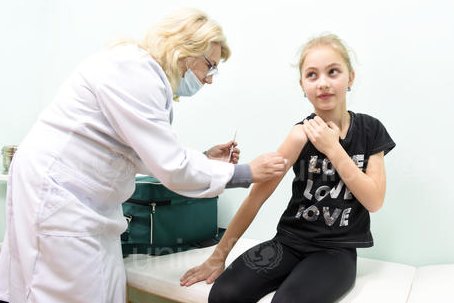 Nearly 40 million children missed a measles vaccine dose last year, the WHO said in a report issued Wednesday, calling the situation a "significant setback in global progress towards achieving and maintaining measles elimination."

Millions of children across the world are now susceptible to infection by the acute viral respiratory illness.

Coverage has steadily declined since the beginning of the COVID-19 pandemic while surveillance of the disease has weakened in many areas, according to the WHO. Vaccination programs have also been interrupted repeatedly as health officials prioritize COVID-19.

An estimated 9 million global cases and 128,000 deaths from measles were recorded in 2021, while 22 countries experienced "larger and disruptive" outbreaks. Persistent large outbreaks this year mean measles is an imminent threat in every region of the world.

"The paradox of the pandemic is that while vaccines against COVID-19 were developed in record time and deployed in the largest vaccination campaign in history, routine immunization programs were badly disrupted, and millions of kids missed out on life-saving vaccinations against deadly diseases like measles," WHO Director-General Dr. Tedros Adhanom Ghebreyesus said in a statement.

"Getting immunization programs back on track is absolutely critical. Behind every statistic in this report is a child at risk of a preventable disease."

One of the most contagious human viruses known to man, measles is only preventable through a two-dose vaccine. Herd immunity can only be achieved through vaccination coverage of 95% or higher.

Only 81% of children globally are receiving their first vaccine dose, and only 71% are receiving the second and final shot. That marks the lowest average global coverage rate for the first dose since 2008, according to the WHO.

Since 2016, 10 countries that had previously eliminated measles experienced outbreaks.

"The record number of children under-immunized and susceptible to measles shows the profound damage immunization systems have sustained during the COVID-19 pandemic," CDC Director Dr. Rochelle Walensky said in a statement.

"Measles outbreaks illustrate weaknesses in immunization programs, but public health officials can use outbreak response to identify communities at risk, understand causes of under-vaccination, and help deliver locally tailored solutions to ensure vaccinations are available to all."

World News // 19 hours ago
Peruvian president impeached hours after trying to dissolve Congress
Dec. 7 (UPI) -- Peruvian President Pedro Castillo Wednesday said in a public address he was dissolving Congress and imposing an emergency government to rule by decree hours before a scheduled vote Wednesday to impeach him.

World News // 22 hours ago
New Zealand court rules against parents who refused 'vaccinated blood' for baby
Dec. 7 (UPI) -- Health authorities in New Zealand have won a High Court decision granting temporary guardianship of a 6-month-old baby so his heart surgeon and cardiologist can give consent for life-saving medical care.

World News // 22 hours ago
Negotiations at COP15 summit seek global agreement on fostering biodiversity
Dec. 7 (UPI) -- The COP15 biodiversity summit got underway Tuesday in Montreal, Canada, where 192 member nations were set to negotiate conservation and biodiversity goals that will remain in effect for at least the next decade.

World News // 1 day ago
U.S., Britain partner up to break Russia's hold on energy
Dec. 7 (UPI) -- The U.S. government committed to doubling its LNG exports to the United Kingdom under the terms of a new bilateral energy partnership.
Advertisement