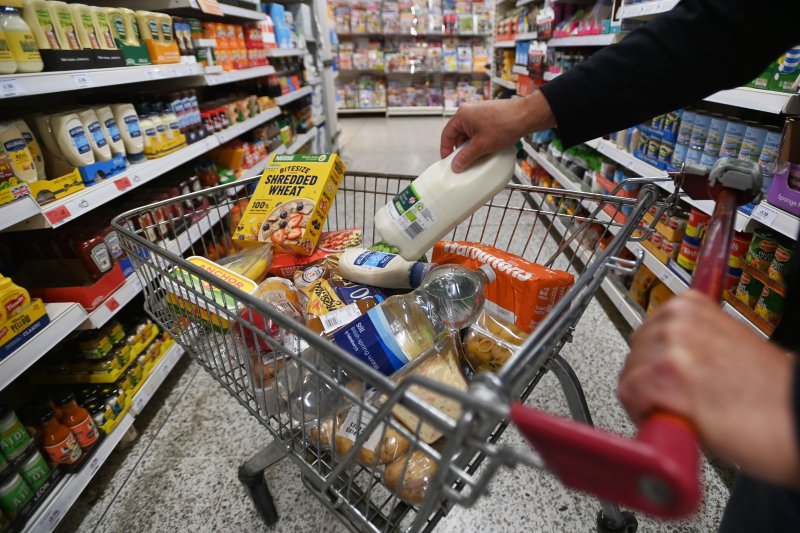 A shopper pushes a food trolley through a supermarket in central London back in August, around the time that inflation hit 10.1%, a record 40 year high.The UK cost of living crisis is worsening as increasing food prices are driving up inflation. File photo by Andy Rain/EPA-EFE

Nov. 11 (UPI) -- Government figures released Friday show the British economy shrank over a three-month period of the summer -- indicating that the country was headed toward a recession as inflation and high energy prices continue to squeeze businesses and consumers.

The country's GDP sank 0.2% between July and September, according to data from the Office for National Statistics. Although the contraction was smaller than expected, it was still cause for concern. A recession is defined as two consecutive quarters of decline in GDP.

The government said GDP fell 0.1% in August, followed by 0.6% in September, while noting that a slump in retail and manufacturing occurred as the nation was mourning the death of Queen Elizabeth II.

Around the same time, inflation hit 10.1% throughout Britain, a 40-year high that prompted the Bank of England to warn a recession was on the horizon by the end of 2022 with inflation forecast to exceed 13%.

Meanwhile, the British economy was 0.2% smaller than it was in February 2020, primarily due to the prolonged impact of the COVID-19 pandemic that devastated the economy for months, the report said.

More recently, Britain has been struggling under the weight of record inflation that has been partly due to Russia's ongoing war in Ukraine and President Vladimir Putin's disruption to energy markets around the world.

"We are not immune from the global challenges of high inflation and slow growth largely driven by Putin's illegal war in Ukraine and his weaponization of gas supplies," British Treasury chief Jeremy Hunt said in a statement.

In response to rising inflation, the Bank of England has been steadily hiking interest rates to record levels throughout the year in an effort to tame consumer prices.

Last Thursday, the British central bank increased the nation's interest rate by 0.75 percentage point, its biggest jump in 33 years, to 3%, while issuing warning of challenging economic times ahead.

"The MPC's latest projections described a very challenging outlook for the UK economy," the central bank said in a summary and minutes of the meeting. "It was expected to be in recession for a prolonged period and CPI inflation would remain elevated at over 10% in the near term."

Higher interest rates are expected to push inflation down sharply beginning in mid-2023.

Since taking over the government, Prime Minister Rishi Sunak has been scrambling to make billions of dollars in budget cuts that would stabilize the economy following the resignation of his predecessor, Liz Truss -- who stepped down Oct. 20 after only 45 days in office due to a hastily implemented economic plan that shook financial markets and threatened to deepen the crisis.

Hunt, the nation's treasurer, is scheduled to give a statement on the budget early next week, and it's widely expected that he will announce further public spending cuts and tax increases that would help shore up the nation's finances in the short term.

On Friday, Hunt posted a short prelude to his upcoming speech on Twitter.

"I am under no illusion that there is a tough road ahead -- one which will require extremely difficult decisions to restore confidence and economic stability," he wrote. "But to achieve long term, sustainable growth, we need to grip inflation, balance the books and get debt falling. There is no other way."

Bank of England boosts interest rate by 0.75 point, highest in 33 years Inflation rose to record mark in August across 19 nations that use the euro

World News // 23 hours ago
Explosion at Pakistani mosque kills at least 48, injures many others
Jan. 30 (UPI) -- A suicide bomber allegedly detonated an explosive vest during crowded afternoon prayer at the Police Lines Mosque, officials said. About 150 were injured in the attack, some in critical condition.

World News // 21 hours ago
Russia launches widespread attack on Ukraine, kills 3 in Kherson
Jan. 30 (UPI) -- Ukraine faced widespread attacks from Russia on Monday, including the shelling of residential areas in the recently liberated city of Kherson, where three people died and 10 others were injured, officials said.

World News // 22 hours ago
WHO: COVID pandemic remains an emergency, but not for much longer
Jan. 30 (UPI) -- The COVID-19 pandemic may be approaching an ''inflection point'' where increased immunity levels may limit the impact of the virus on morbidity and mortality, the World Health Organization said Monday.

World News // 23 hours ago
Renault to lose 28% stake in Nissan in restructuring deal
Jan. 30 (UPI) -- Two of the world's biggest auto manufacturers have agreed to overhaul their decades-long partnership in a restructuring deal that would significantly curtail Renault's controlling interest in Nissan.

World News // 1 day ago
Royal Philips says it will cut 6,000 more jobs
Jan. 30 (UPI) -- Dutch medical device maker Royal Philips announced Monday it will lay off 6,000 employees worldwide, half of those by the end of this year.