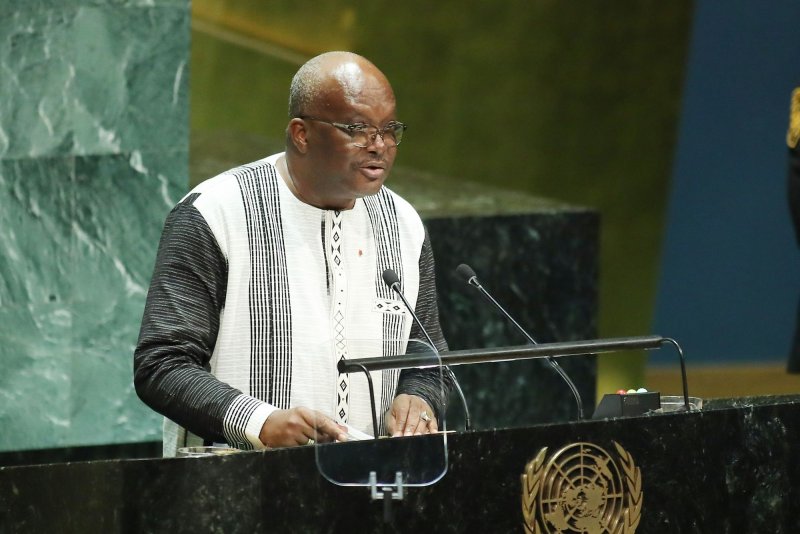 Americans in Burkina Faso were told to shelter in place Saturday in the aftermath of a military coup, the second in eight months since former president Roch Kaboré (pictured) was deposed. File Photo by Monika Graff/UPI | License Photo

Oct. 1 (UPI) -- Americans at the United States embassy in Burkina Faso were told to shelter in place overnight Saturday because of gunfire sparked by the African nation's second military coup in eight months.

"After a quiet overnight, gunfire was reported again in the Ouaga 2000 neighborhood, the downtown area, and other parts of the city," the U.S. State Department said in an online memo to Americans. "Aircraft were also reported overhead throughout the city. Embassy personnel continue to shelter in place."

In a television address to the country on Friday, Traore announced that borders would be closed indefinitely and that all political and civil society activities were suspended, while also imposing a curfew.

"Faced with the deteriorating situation, we tried several times to persuade Damiba to refocus the transition on the security question," he said in a statement read on television by another officer.

In a separate TV address, Traore's group claimed Damiba was planning a counter-attack.

Damiba's status was unknown Saturday. The former leader took charge on Jan. 24, blaming then-president Roch Kaboré for failing to contain violence by Islamist militants. At the time, Damiba said, the military would return to "constitutional order" within a reasonable timeframe.

Violence has since proliferated the country. Damiba replaced his defense minister in September, assuming the role himself after a particularly violent period.

A Louisiana nun living in the country was kidnapped by armed gunmen on April 5. Suellen Theresa Tennyson, 83, was eventually freed at the end of August and returned to the United States.

She called on the new military junta to "prioritize the humane treatment of people in custody, respect freedoms of the media and rights defenders, and ensure that military operations abide by the laws of war."

The authorities should also "promptly transition to civilian democratic rule, so that Burkinabé can vote in free and fair elections for the leaders of their choice," Dufka added.

He called on the Burkina Faso military to "immediately and totally refrain from any acts of violence or threats to the civilian population, civil liberties, human rights, and ensure strict compliance with electoral deadlines for the restoration of constitutional order" by July 1, 2024, at the latest.

World News // 2 hours ago
No shortage of bullish factors for crude oil
Dec. 5 (UPI) -- From a price cap to limits on Russian oil, crude oil prices will remain under the influence of a variety of global factors this week.