Vast plumes of methane bubbling up from Nord Stream leaks 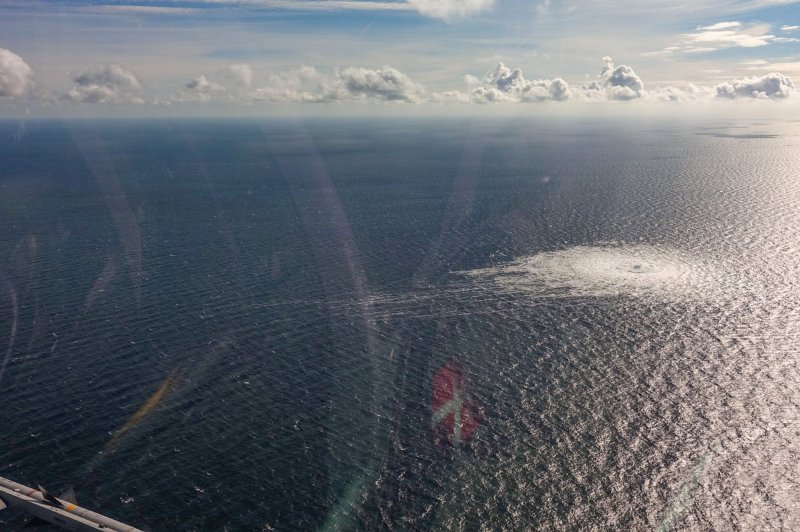 View taken from a Danish F-16 interceptor of the Nord Stream 2 gas leak just south of Dueodde, Denmark, on Tuesday. This leak is one of three on the Nord Stream gas pipelines in the Baltic Sea. The other two are located on Nord Stream 1 northeast of Bornholm. The Danish Navy has established prohibition zones around the leaks for the safety of ship and air traffic. Photo courtesy of Danish Defence | License Photo

The Danish military, according to CNBC, has verified through video footage that the leaks have created a sea disturbance of around 0.62 miles in diameter.

The U.N. International Methane Emissions Observatory said Thursday on Twitter that image analysis conducted alongside researchers at the Polytechnic University of Valencia, Spain, confirmed that what's bubbling to the surface is indeed methane.

CNBC pointed to separate analysis from German environmental researchers that put the amount of methane bubbling to the surface at the equivalent of 7.5 million metric tons of carbon dioxide. That's about one-third of the total annual greenhouse gas emissions from Denmark.

Methane is a potent greenhouse gas that has almost 80 times more warming potential than carbon dioxide.

Even still, the leaks from the Nord Stream network are tiny when compared with total global greenhouse gas emissions. That said, Paul Balcombe, a scholar at Imperial College London, told CNBC the emissions could eclipse the 2015 Aliso Canyon methane leak in California, which at the time was the largest known methane release in U.S. history.

Bloomberg reported that regional authorities have uncovered four leaks on the pipeline network, leaks that various Western powers say were caused by a deliberate act of sabotage.

"An attack on critical infrastructure of our European partners and NATO allies is a matter of concern for us," White House spokesperson Karine Jean-Pierre said Wednesday.

The pipeline is controlled by Russian energy company Gazprom. The Kremlin denied that it was behind any sabotage on its own pipeline network. The Kremlin, however, is broadly accused of using its vast wealth of natural resources as a tool to gain regional leverage as it continues to wage war on a Western-leaning Ukraine.

While there is natural gas remaining in the network, it was not in service at the time of the explosions.

World News // 3 hours ago
No shortage of bullish factors for crude oil
Dec. 5 (UPI) -- From a price cap to limits on Russian oil, crude oil prices will remain under the influence of a variety of global factors this week.