Head of the self-proclaimed Luhansk People's Republic, Leonid Pasechnik, speaks during a briefing in Luhansk, Ukraine, on Friday. Photo by Stringer/EPA-EFE

Sept. 23 (UPI) -- Residents of four Russian strongholds in Ukraine are voting Friday on referendums that could lead to Moscow again annexing parts of the country, as it did in Crimea nearly a decade ago.

The referendums were announced a few days ago. Since then, the international community has denounced the Russian effort as yet another illegal move to take more territory from Ukraine. Russian authorities said the voting will be done door-to-door and polling places will open for a final vote on Tuesday.

"I am sure that the referendums will take place in a way that no one will have grounds to question their legitimacy," Russian Federation Council Speaker Valentina Matviyenko said according to the state-run TASS news agency.

"The expression of will takes place in accordance with international norms and the [United Nations] Charter. The residents of the [Donetsk and Luhansk People's Republic] and other liberated territories have this right, a legal right. And in today's situation, it is actually the right to life."

Mykhailo Podolyak, an adviser to Ukrainian President Volodymyr Zelensky, bristled at the legitimacy of the referendums and called for the territories to be returned to Ukraine.

"Today, there is no legal action called a 'referendum' in the occupied territories," he said in a tweet Friday. "There is only -- 1. Propaganda shows for z-conscription. 2. The territory of Ukraine that needs an immediate release." 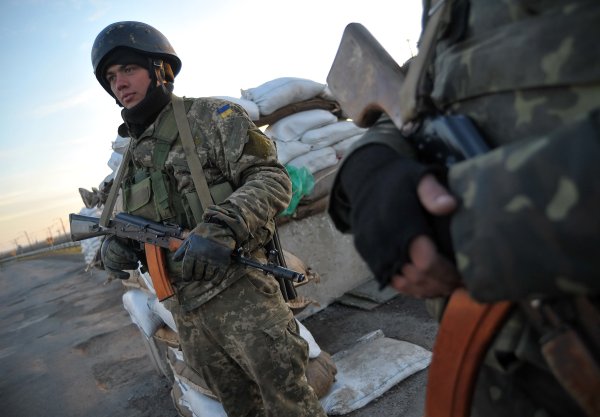 Ukrainian troops stand guard in the Kherson region of Ukraine on March 16, 2014, following a controversial referendum that led Russia to annex Crimea. On Friday, Kherson and three other regions held similar referendums on becoming part of Russia. File Photo by Ivan Boberyskyy/EPA

NATO called Friday's voting a clear violation of the U.N. Charter, adding that the defensive alliance "will not recognize" the results of the referendums.

"As the U.N. General Assembly reaffirmed in its resolution 'Aggression against Ukraine' ... no territorial acquisition resulting from the threat or use of force shall be recognized as legal," NATO said in a statement.

"Allies do not and will never recognize Russia's illegal and illegitimate annexation of Crimea. Sham [referendums] in the Donetsk, Luhansk, Zaporizhzhia, and Kherson regions of Ukraine have no legitimacy and will be a blatant violation of the U.N. Charter."

The voting in the four regions of Ukraine is exactly what Russia did in 2014 when it took Crimea away from Ukraine. It began with a referendum vote, which overwhelmingly favored joining Russia, and was followed by the annexation of the Crimean Peninsula. Most experts questioned the legitimacy of that referendum vote.

Meanwhile, Britain's defense ministry said on Friday Ukraine is keeping up military pressure on territory that Russia considers essential to its overall goals -- but added that the situation following Kyiv's wildly successful counteroffensive is "complex."

"In the last three days, Ukrainian forces have secured bridgeheads on the east bank of the Oskil River in Kharkiv Oblast," the ministry said on Twitter. "Russia has attempted to integrate the Oskil into a consolidated defensive line following its forces' withdrawals earlier in the month.

"To the south, in Donetsk Oblast, fighting is ongoing as Ukrainian forces assault the town of Lyman, east of the Siversky Donets River, which Russia captured in May."

Secretary of State Anthony Blinken calls on U.N. to send Putin a message